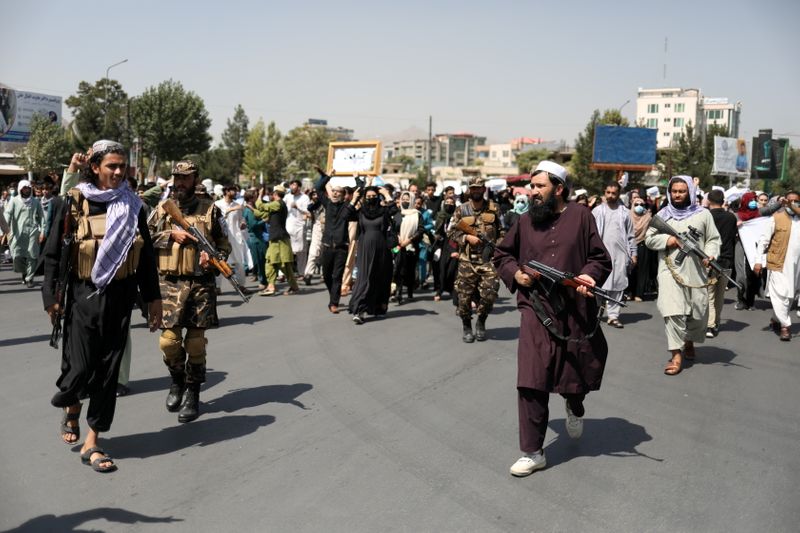 
(Reuters) – Foreign countries greeted the makeup of the new government in Afghanistan with caution and dismay on Wednesday after the Taliban appointed hardline veteran figures to top positions, including several with a U.S. bounty on their head.

Small protests persisted in Afghanistan, with dozens of women taking to the streets of Kabul to demand representation in the new administration and for their rights to be protected.

More broadly, people urged the new leaders to revive the Afghan economy, which is facing steep inflation, food shortages exacerbated by drought and the prospect of overseas investment disappearing as the outside world eyes the Taliban warily.

The Islamist militant movement swept to power nearly four weeks ago in a stunning victory hastened by the withdrawal of U.S. military support to Afghan government forces.

It has taken time to form a government, and although the posts are acting rather than final, the appointment of a cabinet of hardline veterans has been seen by other nations as a signal that the Taliban are not looking to broaden their base and present a more tolerant face to the world.

The group has promised to respect people’s rights and not seek vendettas, but it has been criticised for its heavy-handed response to protests and its part in a chaotic evacuation of tens of thousands of people from Kabul airport.

“The announcement of a transitional government without the participation of other groups and yesterday’s violence against demonstrators and journalists in Kabul are not signals that give cause for optimism,” German Foreign Minister Heiko Maas said.

The European Union voiced its disapproval at the appointments, announced late on Tuesday in Kabul, but said it was ready to continue humanitarian assistance. Longer term aid would depend on the Taliban upholding basic freedoms.

The U.S. State Department said it was concerned about the “affiliations and track records” of some of the people named by the Taliban to fill top posts.

“The world is watching closely,” a spokesperson said.

The new acting cabinet includes former detainees of the U.S. military prison at Guantanamo Bay, while the interior minister, Sirajuddin Haqqani, is wanted by the United States on terrorism charges and carries a reward of $10 million.

His uncle, with a bounty of $5 million, is the minister for refugees and repatriation.

The Taliban’s sudden victory, which took even its leadership by surprise, has presented the rest of the world with a dilemma https://www.reuters.com/world/asia-pacific/talibans-new-afghan-government-receives-muted-reception-china-japan-2021-09-08.

They want to keep aid flowing and to help those with the appropriate paperwork who want to leave, but they may have to engage with a movement that, until a few weeks ago, was an insurgency blamed for thousands of civilian deaths.

The last time the Taliban ruled Afghanistan, from 1996 to 2001, women were banned from work and girls from school. The group carried out public executions and its religious police enforced a strict interpretation of Islamic law.

Taliban leaders have vowed to respect people’s rights, including those of women, in accordance with sharia, but those who have won greater freedoms over the last two decades are worried about losing them.

In Kabul, a group of women bearing signs reading “A cabinet without women is a failure” held another protest in the Pul-e Surkh area of the city. Larger demonstrations on Tuesday were broken up when Taliban gunmen fired warning shots https://www.reuters.com/world/asia-pacific/afghan-protests-persist-posing-problem-new-taliban-government-2021-09-07 into the air.

“The cabinet was announced and there were no women in the cabinet. And some journalists who came to cover the protest were all arrested and taken to the police station,” said a woman in a video shared on social media.

Zaki Daryabi, head of the daily newspaper Etilaatroz, said some of his reporters had been beaten while covering Tuesday’s protests, which came hours before the new government was revealed.

Taliban officials have said that protests would be allowed, but that they must be announced in advance and authorised.

For many Afghans, more pressing than the composition of the cabinet was the economic fallout of the chaos triggered by the Taliban’s conquest, including its impact on healthcare.

Shukrullah Khan, manager of a restaurant at Qargha Lake, a popular local resort near Kabul, said business had slumped to next to nothing.

“The business and bazaars compared to the previous government, has been decreased by 98%,” he said.

“The banks are closed, there’s no jobs, people no longer spend money. Where does the money come from so that people can have fun here?”

Aid flights have begun to arrive at Kabul airport, but many more will be needed over the coming months.

The president of the International Committee of the Red Cross (ICRC) appealed to other humanitarian organisations to return to Afghanistan and for the World Bank to unlock funds to support the tottering healthcare system.