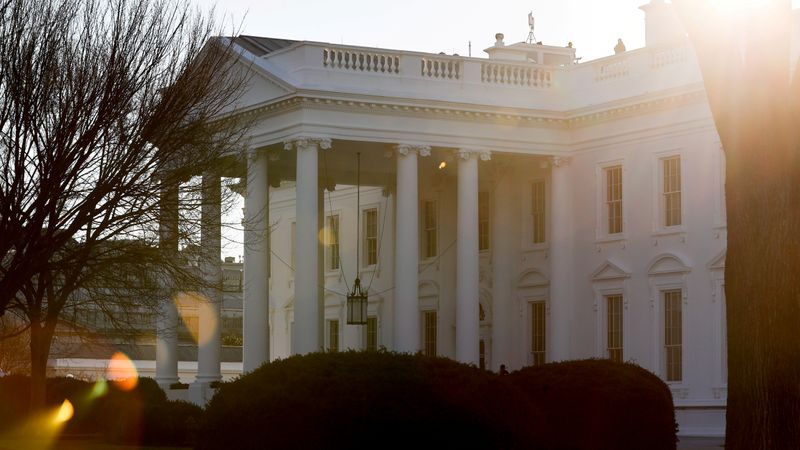 © Reuters. FILE PHOTO: A general view of the sun rising behind the White House in Washington, U.S. January 22, 2021. REUTERS/Jonathan Ernst

(Reuters) -The White House has been speaking with U.S. oil and gas producers in recent days about helping to bring down rising fuel costs, according to two sources familiar with the matter.

Energy costs are rising worldwide, in some cases leading to shortages in major economies like China and India. In the United States, the average retail cost of a gallon of gas is at a seven-year high, and winter fuel costs are expected to surge, according to the U.S. Energy Department. Oil-and-gas production remains below the nation’s peak reached in 2019.

“We are closely monitoring the cost of oil and the cost of gas Americans are paying at the pump. And we are using every tool at our disposal to address anti-competitive practices in U.S. and global energy markets to ensure reliable and stable energy markets,” a White House official said, without addressing whether it has been in touch with the industry.

oil recently hit $80 a barrel for the first time in seven years, as the Organization of the Petroleum Exporting Countries and their allies known as OPEC+ restrict output.

The average retail price of a gallon of gasoline has risen to $3.29, according to AAA figures. The U.S. Energy Department said on Wednesday that household heating costs are expected to rise dramatically this winter for all fuels, but particularly for and propane.

U.S. oil production has been slow to rebound from 2020, when output dropped during the coronavirus outbreak. Production hit a record of nearly 13 million barrels per day (bpd) in late 2019, but the U.S. Energy Department said Wednesday that output will only average 11 million bpd in 2021, rising to 11.7 million bpd in 2022.

prices are up sharply this year, the result of supply shortages and stronger-than-expected demand in Europe and Asia.

President Joe Biden’s administration has been conducting internal discussions about rising fuel costs, one of the two sources added.

U.S. shale producers, who are responsible for the boom in crude oil output in the last 10 years, have been less willing to drill for more oil after years of weak financial performance, and have instead focused on cutting spending to boost returns for investors.