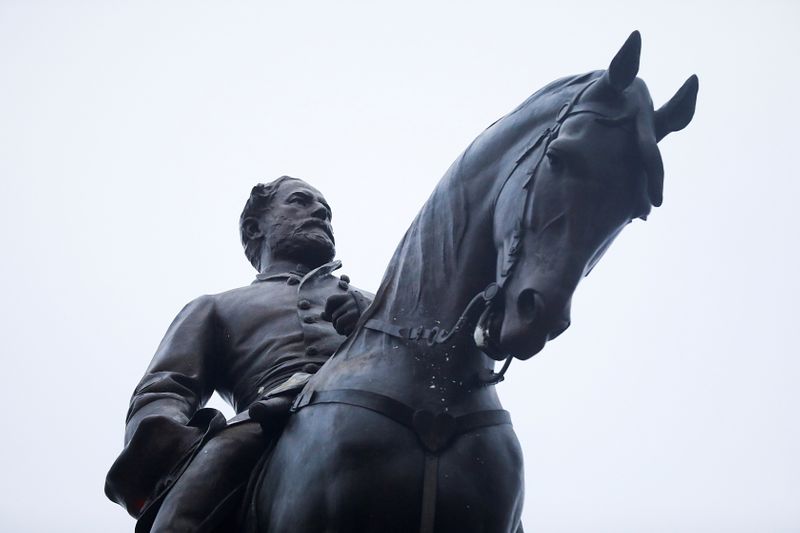 
(Reuters) – A statue of Confederate Civil War General Robert E. Lee that towers six stories over Richmond, Virginia, and was a centerpiece of protests over racial injustice, is coming down this week.

The Commonwealth of Virginia announced on Sunday it would remove the 12-ton bronze statue on Monument Avenue on Wednesday, stashing it in a secure state-owned storage site until a decision on its future is finalized.

that Governor Ralph Northam could remove it because documents controlling its location were outdated.

Northam, a Democrat, had announced plans to remove the statue in June 2020, 10 days after a white Minneapolis policeman killed George Floyd, who was Black, sparking nationwide protests.

Statues honoring leaders of the pro-slavery Confederate side in the American Civil War have become a focus of protests against racism in recent years.

Lawsuits seeking to block the removal were filed by nearby residents who said they had a property right to keep the statue in place and it should be left alone. The court disagreed, saying the documents that controlled the statue’s location were outdated and unenforceable.

Richmond Mayor Levar Stoney said whatever replaces the Lee statue should send the clear message that “Richmond is no longer the capital of the Confederacy. We are a diverse, open and welcoming city, and our symbols need to reflect that reality.”

The six-story tall statue sits on a 40-foot (12.2 m) granite pedestal, which will remain in place as the community reimagines Monument Avenue, a tourist draw in the Confederacy’s former capital.