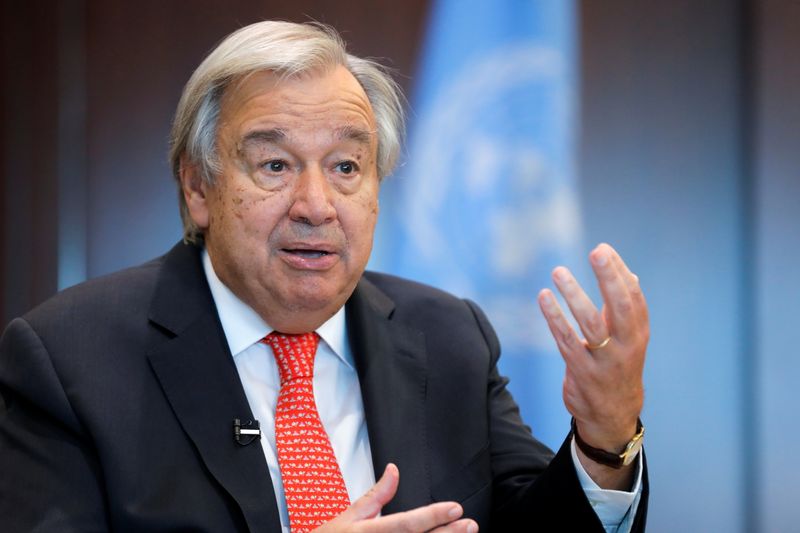 
By Michelle Nichols and Mary Milliken

UNITED NATIONS (Reuters) – U.N. chief Antonio Guterres stressed on Wednesday that he cannot ask world leaders to show they have been vaccinated against COVID-19, after New York City officials said proof should be required for anyone entering the U.N. General Assembly Hall.

Dozens of heads of state and government and foreign ministers – accompanied by countless diplomats – are due to be in New York next week for an annual high-level gathering at the United Nations. Some leaders are staying away and sending a video statement instead because of the coronavirus pandemic.

New York City officials told the United Nations that under its rules people “entering the U.N. premises for the purpose of entering the General Assembly Hall would be required to show proof of vaccination in order to gain entry to the Hall.”

But Secretary-General Guterres told Reuters in an interview: “We, as the Secretariat, cannot tell a head of state if he is not vaccinated that he cannot enter the United Nations.”

The U.N. headquarters in Manhattan is international territory and is not subject to U.S. laws. However, U.N. officials have previously pledged to abide by local and national guidance when it came to the pandemic.

“We have discussed with the municipality the different ways to ensure that we have the maximum of people with vaccination and the New York Mayor’s office has put a vaccination capacity at our disposal. So people that come will be able to be vaccinated,” Guterres said.

Guterres said the discussions around how many traveling diplomats might have been immunized illustrated “how dramatic the inequality is today in relation to vaccination.” Though he added that the “overwhelming majority” of delegations traveling to New York would be vaccinated.

Out of 5.7 billion doses of coronavirus vaccines https://graphics.reuters.com/world-coronavirus-tracker-and-maps/vaccination-rollout-and-access administered around the world, only 2% have been in Africa.

Guterres has warned that the longer the virus circulates among billions of unvaccinated people, the higher the risk of more dangerous variants. He is pushing for a global plan with the aim of vaccinating 70% of the world’s population by the first half of next year.

New York Mayor Bill de Blasio said on Wednesday that the city would provide COVID-19 testing and the single-dose Johnson & Johnson (NYSE:) vaccine at a site outside U.N. headquarters next week.

De Blasio praised U.N. General Assembly President Abdulla Shahid for telling U.N. colleagues in a letter that he strongly supports proof of vaccination and would work with the secretary-general to implement the requirement “as soon as possible.”

However, Russian U.N. Ambassador Vassily Nebenzia said on Wednesday that Moscow objected to anyone having to show vaccination proof to enter the General Assembly, describing such a move as discriminatory.

In a letter to U.N. colleagues, Nebenzia called for the General Assembly to meet on Thursday to discuss the issue. It was not immediately clear if such a meeting would be scheduled.

New York City officials told the United Nations that the spread of the highly contagious Delta variant was a major concern and that new cases had increased significantly in the past two months.

U.S. ambassador to the United Nations, Linda Thomas-Greenfield, last month urged world leaders to send videos instead of traveling to New York, saying it would help prevent the gathering “from being a super-spreader event.”