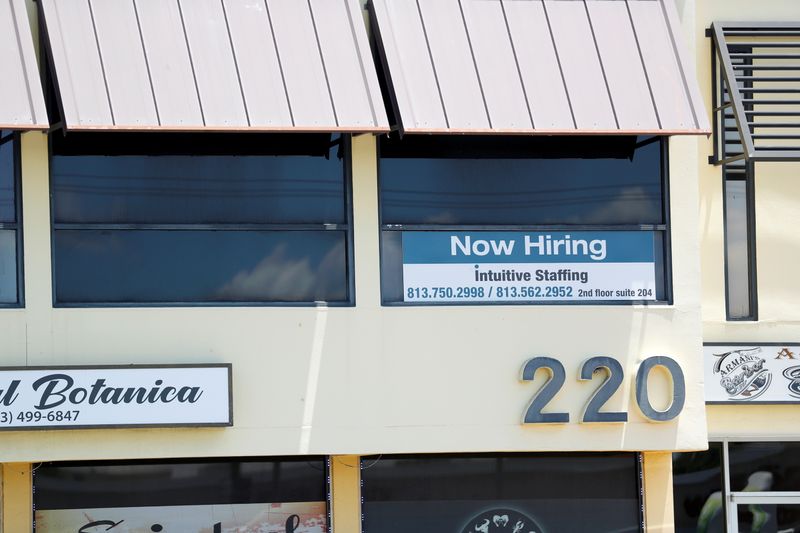 WASHINGTON (Reuters) – The number of Americans filing new claims for jobless benefits fell last week to the lowest level in nearly 18 months, offering more evidence that job growth was being hindered by labor shortages rather than cooling demand for workers.

Initial claims for state unemployment benefits dropped 35,000 to a seasonally adjusted 310,000 for the week ended Sept. 4, the Labor Department said on Thursday.

That was the lowest level since mid-March 2020 when mandatory closures of nonessential businesses were enforced to slow the first wave of COVID-19 cases. Economists polled by Reuters had forecast 335,000 applications for the latest week.

Claims have dropped from a record 6.149 million in early April 2020. They, however, remain above the 200,000-250,000 range viewed as consistent with healthy labor market conditions.

The claims report, the most timely data on the economy’s health, suggested the labor market was holding up, despite a resurgence in infections, driven by the Delta variant of the coronavirus. Rising infections contributed holding back job growth in August, with nonfarm payrolls increasing only 235,000, the smallest gain since January. Payrolls surged 1.053 million in July.

“With Delta cases appearing close to a peak in the United States, we expect hiring to pick back up in September, although the pace of job growth is unlikely to return to the robust pace of early summer,” said Sarah House, a senior economist at Wells Fargo (NYSE:) in Charlotte, North Carolina.

Government data on Wednesday showed job openings surged to a record 10.9 million at the end of July.

About 8.4 million people are officially unemployed. This labor market imbalance has been blamed on lack of affordable childcare, fears of contracting the coronavirus, generous unemployment benefits funded by the federal government as well as pandemic-related retirements and career changes.

There is cautious optimism that the labor crunch will ease starting in September following the expiration of the government-funded unemployment benefits on Monday. The new school year is underway, with most school districts offering in-person learning.

But the Delta variant could cause reluctance among some people to return to the labor force. There is also no guarantee that the expiration of the expanded benefits will force the unemployed to look for work. An early termination of these benefits by about 25 states led by Republican governors over summer did not expand the labor pool.

“Evidence from states that ended benefits programs early suggests there might not be a sudden substantial return to work as unemployment benefits end,” said Veronica Clark, an economist at Citigroup (NYSE:) in New York.