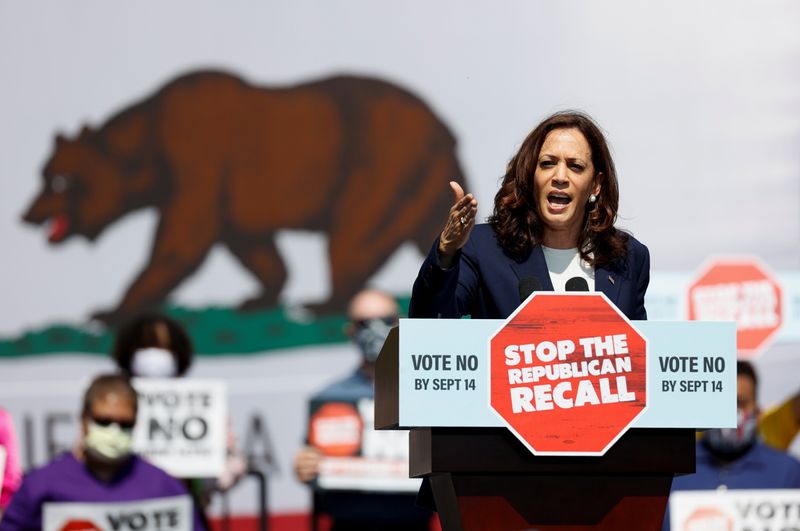 SACRAMENTO, Calif. (Reuters) – Vice President Kamala Harris campaigned on Wednesday for embattled California Governor Gavin Newsom, part of a ramped-up effort to save his job from a Republican-led recall by bringing in some of the Democratic Party’s biggest names.

Harris, a longtime ally of Newsom, appeared with the governor in San Leandro, near her childhood home of Oakland. Harris previously served as a U.S. senator from California and state attorney general.

She painted the recall, which is backed financially by state and national Republican groups, as part of a broader Republican effort to oust Democrats from power and expand conservative restrictions on voting, abortion and LGBTQ rights.

“They think if they can win in California, they can do this anywhere,” Harris told a crowd of supporters and union members. “Well we’ll show them you are not going to get this done – not here – not ever.”

Harris praised Newsom’s handling of the pandemic and cited his early support for same-sex marriage as mayor of San Francisco.

President Joe Biden also is expected to campaign for the governor ahead of the election next Tuesday.

The special election on whether to recall Newsom is being held as the country’s most-populous state faces an unprecedented onslaught of troubles including wildfires, extreme drought and the ongoing COVID-19 pandemic.

The recall question was placed on the ballot after a petition drive by a conservative group called the Patriot Coalition.

Democrats outnumber Republicans 2-to-1 in the state, and a recent poll by the Public Policy Institute of California showed that 58% of likely voters opposed recalling Newsom, a first-term governor.

But complacency among Democrats could tilt the election toward Republicans, who are more motivated to vote by their opposition to Newsom’s progressive policies on immigration and crime.

The Democratic governor’s decision to shut down in-person schooling during the worst of the pandemic, as well as mask and vaccination mandates, has also angered some conservatives.

On Wednesday, the firm Political Data Intelligence released data on early returns that showed Democrats were sending mail-in ballots at more than twice the rate of Republicans.

Many Republicans no longer trust mail-in voting after former President Donald Trump’s false claims about voter fraud in the 2020 presidential election, a hesitancy the party is trying to counter https://www.reuters.com/world/us/california-republicans-launching-campaign-boost-trust-mail-in-voting-2021-09-03.

Experts say more Republicans may vote this week as early, in-person voting begins or on Election Day next Tuesday, possibly giving them an edge.