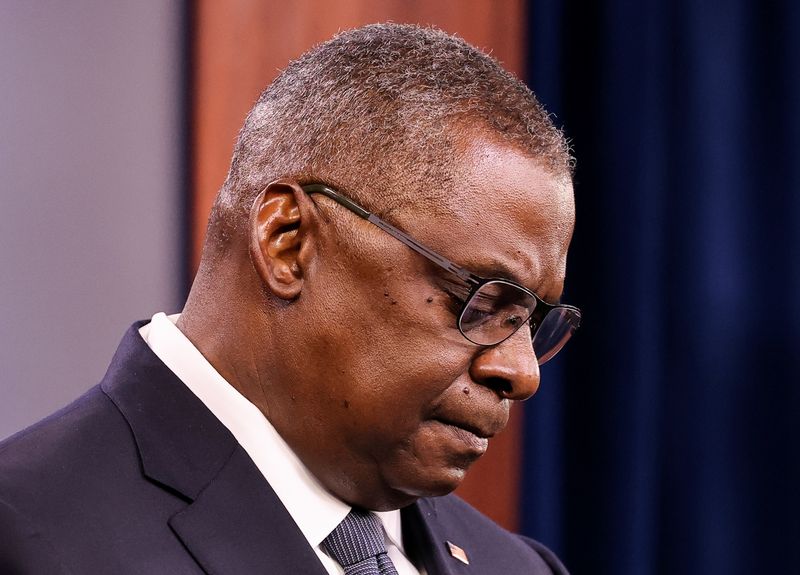 © Reuters. FILE PHOTO: U.S. Defense Secretary Lloyd Austin pauses as he discusses the end of the military mission in Afghanistan during a news conference at the Pentagon in Washington, U.S., September 1, 2021. REUTERS/Evelyn Hockstein

By Patricia Zengerle and Doina Chiacu

WASHINGTON (Reuters) – The chairman of the Senate Foreign Relations Committee threatened on Tuesday to subpoena Secretary of Defense Lloyd Austin and other officials if necessary to obtain their testimony about the chaotic U.S. withdrawal from Afghanistan.

“A full accounting of the U.S. response to this crisis is not complete without the Pentagon – especially when it comes to understanding the complete collapse of the U.S.-trained and funded Afghan military,” Democratic Senator Bob Menendez said at the second congressional hearing in two days with testimony from Secretary of State Antony Blinken.

“I expect that the Secretary (Austin) will avail himself to the Committee in the near future. If he does not, I may consider the use of the Committee’s subpoena power to compel him and others over the course of these last twenty years to testify,” Menendez said.

Lawmakers – President Joe Biden’s fellow Democrats as well as Republicans – peppered Blinken with questions and criticism about the messy end last month to America’s longest war and why the administration did not delay to allow more people to be evacuated.

Blinken said U.S. officials had not expected the Taliban’s lightning advance and the “11-day collapse” of U.S.-backed Afghan forces.

“That’s what changed everything,” Blinken said.

He said the administration had urged a plan on the U.S.-backed Afghan security forces for defending major cities. “The plan… never took shape,” Blinken said, adding that the former Afghan government had not wanted to seem to be giving up on any part of the country.

Senator Jim Risch, the committee’s top Republican, said he worried the administration was seeking to normalize relations with the Taliban and called plans to restart humanitarian aid as “deeply, deeply concerning.” He described the militant group as “one of the best-armed terrorist organizations on the planet,” now that it controls military equipment left behind by U.S. forces.

“There is not enough lipstick in the world to put on this pig to make it look any different than what it actually is,” Risch said.

Who, what and how to regulate in a borderless, code-governed world?...