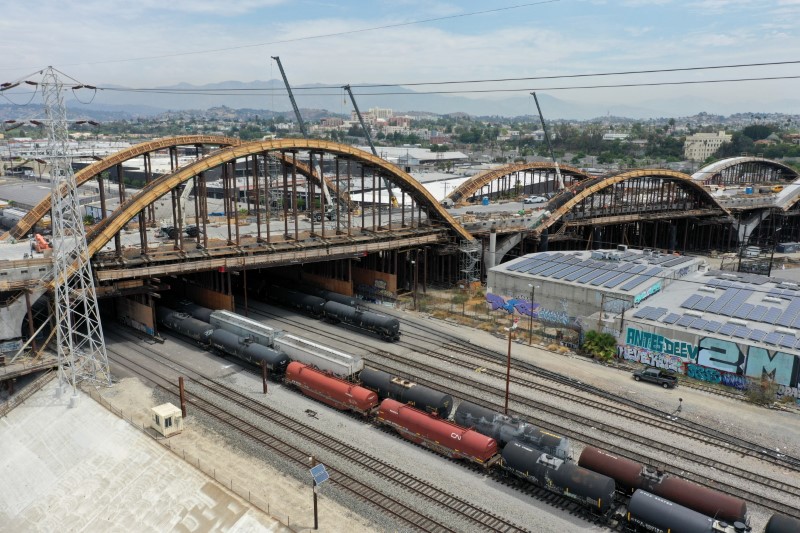 © Reuters. An aerial view of the construction of the Sixth Street Viaduct replacement project, adjacent to a rail yard and a rooftop covered in solar panels, in Los Angeles, California, U.S., August 11, 2021. REUTERS/Bing Guan

The plan is among several proposals floated by Wyden to boost government revenues that also include taxes on CEO pay that exceed a certain multiple of the company’s average worker wages.

The 2% stock buyback tax seeks to address Democrats’ frustrations with a big increase in stock buybacks by publicly traded companies in 2018 after a massive Republican-passed corporate tax cut at the end of 2017 that allowed firms to repatriate profits held overseas at low rates.

“Instead of spending billions buying back stocks and handing out CEO bonuses, it’s past time Wall Street paid its fair share and reinvested more of that capital into the workers and communities who make those profits possible,” said Brown, who is also a Senate Finance Committee member.

Republicans in Congress oppose Biden’s plans to boost spending on child care, health care, education and other social programs, leaving Democrats to try to craft a bill they can pass on their own with a razor-thin majority under budget “reconciliation” rules.

The ultimate size of the spending and tax hikes is still under debate, with some moderate Democrats balking at Biden’s proposed $3.5 trillion cost.

The House Ways and Means Committee this week began considering amendments to the Biden spending bill and so far has defeated several Republican amendments aimed at limiting its scope.