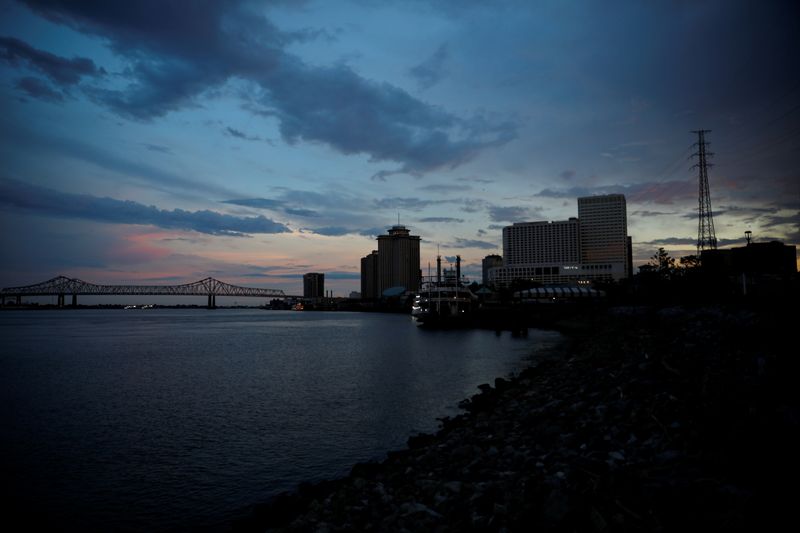 © Reuters. FILE PHOTO: A view of Mississippi River at sunset during a blackout in the city after Hurricane Ida made landfall in Louisiana, in New Orleans, Louisiana, U.S. August 31, 2021. REUTERS/Marco Bello/File Photo

(Reuters) – Louisiana Gulf Coast grain exports are slowly ramping up after a nearly two-week halt due to damage from Hurricane Ida, with at least two large terminals loading vessels and power steadily being restored to others, government and shipping sources said on Thursday.

More than 50 oceangoing vessels have lined up along the lower Mississippi River waiting to dock and be loaded with soybeans or grain, according to Refinitiv Eikon shipping data and industry vessel lineup summaries seen by Reuters.

Restoring shipments from the busiest U.S. grain export hub was welcome relief to markets rattled by the storm disruptions as worries about prolonged outages had sent export costs soaring and stoked fears about global food inflation.

The vessel Navios La Paix was docked at Archer-Daniels-Midland Co’s facility in Destrehan on Thursday and loading with grain bound for Central America, shipping data showed.

A large export terminal owned by Louis Dreyfus Co near Baton Rouge was loading a corn vessel bound for Mexico on Thursday after loading a soybean vessel over the weekend. Some midstream rigs that transfer grain from barges onto bulk ships have also resumed loading.

At least three of the region’s nearly dozen terminals are still without power, including a CHS Inc facility in Myrtle Grove and a heavily damaged Cargill Inc terminal in Reserve, Louisiana Agriculture Commissioner Mike Strain said.

Bunge (NYSE:) Ltd’s facility in Destrehan is “still not operational” and the company has no estimate yet as to when it will be back online, spokeswoman Daiana Bein Endruweit said.

“Things are finally starting to move again, which is good because the harvest is coming. Hopefully we can catch up pretty quick,” said a U.S. export trader, asking not to be named as he is not authorized to speak with media.

Asia’s grain and oilseed buyers were preparing for shipping delays of at least a month after the storm, traders and a miller said on Wednesday.

Barge-loading river elevators in the U.S. farm belt have been holding back downriver shipments of grain as hurricane damage is cleared and power is restored.

Just 258,000 tons of corn and soybeans were shipped through key river locks on the Mississippi River and its tributaries in the week ended Sept. 4, down 65% from the same week last year, according to the U.S. Department of Agriculture.

The U.S. Army Corps of Engineers expects the bulk of shipping channel obstructions on the lower Mississippi to be removed by Sept. 21 and dredged by Sept. 23, Strain said.

Officials are currently restricting the number of barges that each towboat will be allowed to haul at one time through the area for safety, he said.