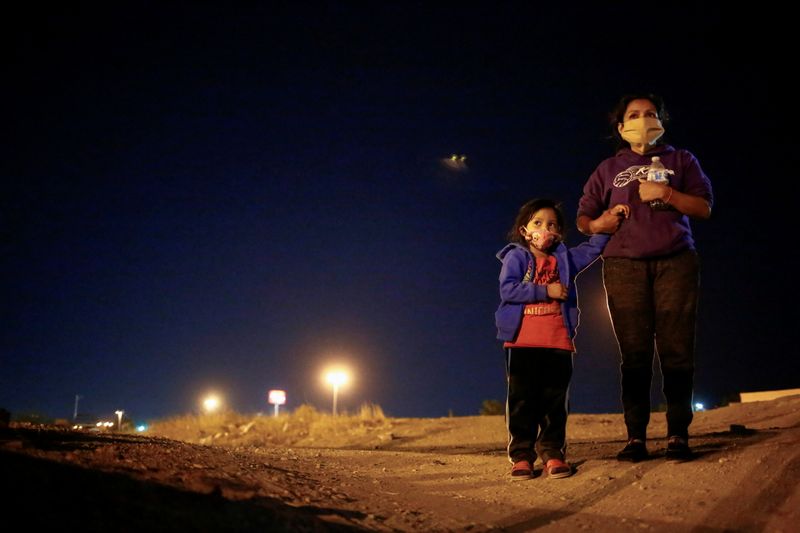 © Reuters. FILE PHOTO: An asylum-seeking migrant from Honduras and her daughter are seen before crossing the Rio Bravo river to turn themselves in to U.S Border Patrol agents to request for asylum in El Paso, Texas, U.S., in Ciudad Juarez, Mexico May 11, 2021. REUTE


By Ted Hesson and Mica Rosenberg

(Reuters) – The United States will extend deportation relief and work permits for more than 300,000 Salvadorans, Hondurans and other immigrants in the United States and enrolled in a program known as Temporary Protected Status (TPS), according to an announcement on Thursday.

The renewals for El Salvador, Haiti, Honduras, Nepal, Nicaragua, and Sudan will last until Dec. 31, 2022, according to U.S. Citizenship and Immigration Services, and were required as part of ongoing litigation over former President Donald Trump’s attempts to end most enrollment in the program.

The “extension ensures continued compliance with various court orders issued by federal district courts,” the announcement from USCIS said. Current beneficiaries under the TPS designations do not need to pay a fee or file any application to maintain their TPS and have their TPS-related documentation automatically extended through the designated period.

The move will disappoint some Democrats and pro-immigrant activists who had pressed President Joe Biden’s administration to expand the program to include hundreds of thousands of additional immigrants instead of simply extending the program for those already enrolled.

Biden, a Democrat, has championed and broadened the TPS program, which gives work permits and deportation relief to immigrants in the United States who come from countries hit by violence or natural disasters. Trump, a Republican tried to end it but was blocked in federal court. Several of the designations have been renewed for decades.

Since Biden took office on Jan. 20, his administration has granted deportation relief to about 500,000 Venezuelans and Haitians through the TPS program. The administration also has extended protections to thousands of people from Myanmar, Somalia, Syria and Yemen.

Biden announced on Aug. 5 that he would also offer deportation relief to what could be thousands of Hong Kong residents in the United States, citing anti-democratic actions by China in Hong Kong.