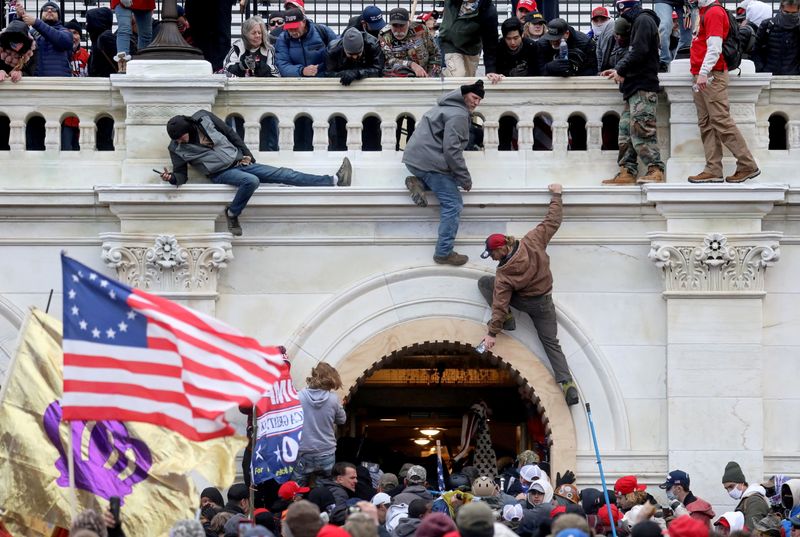 © Reuters. FILE PHOTO: A mob of supporters of U.S. President Donald Trump fight with members of law enforcement at a door they broke open as they storm the U.S. Capitol Building in Washington, U.S., January 6, 2021. REUTERS/Leah Millis/File Photo

WASHINGTON (Reuters) – A congressional committee investigating the deadly Jan. 6 assault on the U.S. Capitol received thousands of documents before Thursday’s deadline for U.S. companies and government agencies to submit them, a committee spokesperson said.

The National Archives, which handles presidential records, has also begun a pre-release review of documents tied to former Republican President Donald Trump’s White House that were part of the committee’s document request.

The Democratic-led House of Representatives Select Committee last month announced extensive requests for materials related to the Capitol attack – including communications records from Trump’s White House – with a submission deadline of Sept. 9.

“With several hours to go before today’s deadline, the Select Committee has received thousands of pages of documents in response to our first set of requests and our investigative team is actively engaged to keep that flow of information going,” the spokesperson said in an emailed statement.

The panel asked for White House records held by the National Archives and Records Administration, as well as material from the Departments of Defense, Homeland Security, Interior and Justice, and the FBI, National Counterterrorism Center and Office of the Director of National Intelligence.

The panel also asked major social media companies including Facebook Inc (NASDAQ:), Twitter Inc (NYSE:) and Alphabet (NASDAQ:) Inc’s Google to turn over records of messages related to the assault on the Capitol by Trump’s supporters.

Details of what was turned over were not available late on Thursday. A source familiar with the matter said material came from both companies and government entities.

Handing over the information violates federal law, McCarthy said, although it was not clear what law he was referring to.

The committee’s request included records connected to the violence and the days leading up to it, including the spread of misinformation and efforts to stop the certification of President Joe Biden’s election.

Trump disparaged the request for documents from his administration and said the materials were protected by executive privilege, a legal principle that allows the White House to refuse to comply with demands for records such as congressional subpoenas or Freedom of Information Act requests.

If the Biden White House says the materials are protected by executive privilege, it would make it more difficult for the committee to investigate Trump. Biden, however, is expected to be sympathetic to the panel’s view that the materials should be produced.

“The Select Committee is also aware that the National Archives has undertaken the process required by law for review of presidential records,” the committee spokesperson said in the statement.

Mobs of Trump supporters stormed the Capitol as Congress was meeting to certify Biden’s election victory, delaying that process for several hours as then-Vice President Mike Pence, members of Congress, staff and journalists fled from rioters.

Nearly 600 people have been arrested in connection with the attack. It was the worst violence at the seat of the U.S. government since the British invasion during the War of 1812.

Four people died on Jan. 6, one shot to death by police and the others of natural causes. A Capitol Police officer attacked while protecting the building died the following day. More than 100 police officers were injured.

Four police officers who took part in the defense of the Capitol later took their own lives.