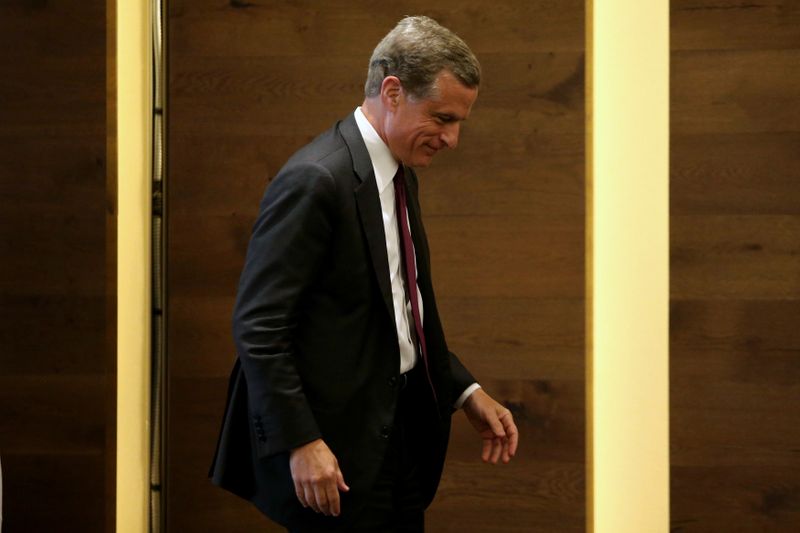 (Reuters) – Media reports this week that two of the Federal Reserve’s 12 regional bank presidents were active traders has some of the central bank’s most vocal critics questioning the rules that allowed them to engage in the transactions in the first place.

Dallas Fed President Robert Kaplan and Boston Fed President Eric Rosengren made frequent or substantial trades in 2020, the Wall Street Journal and Bloomberg reported earlier this week. The trades occurred during a year in which the central bank took major actions to shore up the economy and swooning financial markets after they were broadsided by the coronavirus pandemic.

While the trades were permitted under the Fed system’s ethics guidelines, their disclosure prompted some observers and a top lawmaker to flag possible conflicts of interest.

“Forget about the individual trades,” said Benjamin Dulchin, director of the Fed Up Campaign at the Center for Popular Democracy, a group that advocates for the Fed to focus more on the needs of American workers. “The issue is that a president of a Fed bank – one of the handful of people who … set our country’s monetary policy – so clearly has his personal interests aligned with the success of our biggest corporations.”

On Thursday, Kaplan and Rosengren said in separate statements that their trades complied with the Fed’s ethics rules. They also said they would change their investment practices to address “even the appearance of any conflict of interest” and sell all individual stock holdings by Sept. 30, moving the proceeds into cash or passively invested index funds. Both Kaplan and Rosengren said they would not trade on those accounts as long as they are serving as Fed presidents.

The changes came after they both faced criticism for transactions made last year, dealings that were first reported by the Wall Street Journal https://www.wsj.com/articles/dallas-feds-robert-kaplan-was-active-buyer-and-seller-of-stocks-last-year-11631044094 this week. Each has since made his annual financial disclosures public.

The documents showed that Kaplan, for instance, bought and sold at least $18 million in individual stocks in 2020, mostly tech stocks like Apple Inc (NASDAQ:) and Amazon.com Inc (NASDAQ:) and energy stocks such as Marathon Petroleum Corp (NYSE:). All of those transactions were reviewed by the Dallas Fed general counsel, said Dallas Fed spokesman James Hoard.

Rosengren, who has publicly shared concerns about potential over-valuation risks in the commercial real estate sector, held stakes in four real estate investment trusts and made other investment trades, as highlighted by a Bloomberg https://www.bloomberg.com/news/articles/2021-09-08/fed-official-who-warned-on-real-estate-was-active-reit-trader?sref=HFh69AJb report.

“Regrettably, the appearance of such permissible personal investment decisions has generated some questions, so I have made the decision to divest these assets to underscore my commitment to Fed ethics guidelines,” Rosengren said in a statement on Thursday.

Fed officials are subject to specific restrictions, such as not trading during the “blackout period” around each Fed meeting when policy-sensitive information is distributed, not holding stocks in banks or mutual funds concentrated in the financial sector, and not reselling securities within 30 days of purchase.

But the Code of Conduct has broader language as well.

“An employee should avoid any situation that might give rise to an actual conflict of interest or even the appearance of a conflict of interest,” the code states. Those with access to market-moving information “should avoid engaging in any financial transaction the timing of which could create the appearance of acting on inside information concerning Federal Reserve deliberations and actions.”

The financial disclosures did not look strikingly different from prior years. But 2020 was a signature year for the Fed in which, by its own account, it crossed “red lines” to ensure financial markets continued to function. In a rapid-fire response to the then-unfolding pandemic, Fed policymakers in March 2020 slashed interest rates to near zero and rolled out programs meant to keep the markets for Treasury bonds, mortgage-backed securities and corporate bonds working smoothly.

The Fed’s fast action was praised for helping to stave off a larger financial market collapse, an achievement Fed officials say helped to minimize the hit to the economy. But some criticized the Fed’s moves for helping to boost asset prices while not doing enough to support small businesses and households on Main Street.

Some Fed-watchers say it may be time for the rules to be reviewed.

“This is more evidence that the oversight of the Federal Reserve regional bank presidents is broken,” said Aaron Klein, a senior fellow at the Brookings Institution. “I don’t know if this is a failure to enforce the rules, or a failure of the rules.”

U.S. Senator Elizabeth Warren, long one of Washington’s most vocal critics of the central bank’s approach to financial regulation, said Fed officials should not be allowed to trade.

“I’ve said it before and will say it again: Members of Congress and senior government officials should not be allowed to trade or own stocks,” Warren posted on Twitter (NYSE:) https://twitter.com/SenWarren/status/1436370981669462019 on Friday. “Period.”