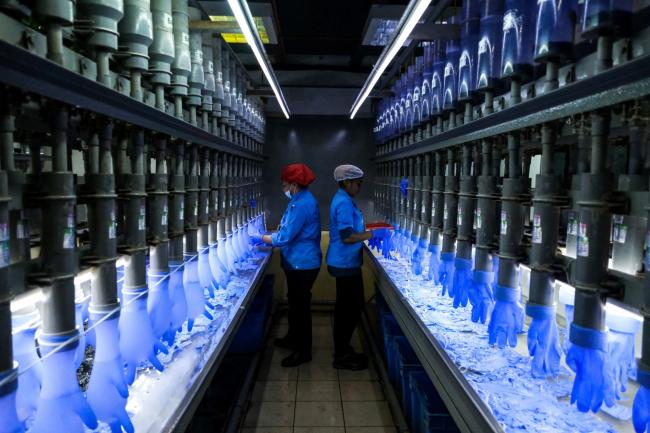 © Bloomberg. Employees check latex gloves in the watertight test room at a Top Glove Corp. factory in Setia Alam, Selangor, Malaysia, on Tuesday, Feb. 18, 2020. The world’s biggest glovemaker got a vote of confidence from investors in the credit market, as the coronavirus fuels demand for the Malaysian company’s rubber products. The World Health Organization is taking an unprecedented step of negotiating directly with suppliers to improve access to gloves, face masks and other forms of protective equipment.

The company, which was slapped an import ban by the U.S. since July last year on evidence of forced labor practices, said in a statement on Friday that it’s been cleared to resume U.S. sales. Top Glove said it remains committed to the health, safety and well-being of its workers. Shares rose as much as 10% in Malaysia, the biggest surge in five months.

The U.S. Customs and Border Protection separately said it will revoke Top Glove’s import ban, according to a notice by the agency posted on the Federal Register website.

“CBP has now determined, based upon additional information, that such merchandise is no longer being, or is likely to be, imported into the United States in violation of section 307 of the Tariff Act of 1930, as amended,” according to the notice.

“We believe that the removal of the ban would boost Top Glove revenue, which have suffered since shipments by Top Glove’s Malaysia to the U.S. halted temporarily,” Tan Kong Jin, an analyst at Kuala Lumpur-based TA Securities, said in a note to clients on Friday.

Sales from North America at Top Glove dropped to 8% during its fiscal third quarter ended May from 23% in the fiscal second quarter ended February, according to Tan. Shares of Top Glove have dropped 48% since the import ban in mid-July 2020 until Thursday. It was up 5% to 3.58 ringgit per share at 10:25 a.m. local time.