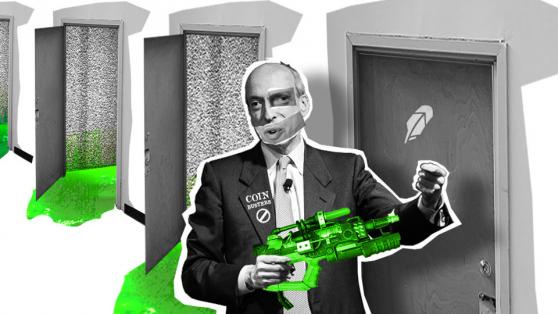 The Gensler Reaper VS. Robinhood. Crypto Next?


It seems that the U.S. Securities and Exchange Commision (SEC) chairman, Gary Gensler, has cryptocurrencies in his crosshairs, as he takes aim at the crypto space. If you have any doubts about that fact, consider the following:

Most recently, Gensler has made known that he wants his agency to ban a specific financial practice used by most crypto and traditional trading exchanges. The practice is known as Payment for Order Flow (PFOF).

PFOF enables trading exchanges to make money selling the trading orders of their customers to third-party market makers. The makers scrape a percentage of a penny in the price difference between the “buy-and-ask” spread of a deal before closing the transaction. At tens of thousands of transactions a day, those fractional pennies add up.

Exchanges that use PFOF as a source of revenue include: E*TRADE, Robinhood (NASDAQ:), Charles Schwab (NYSE:), Ameritrade, Vanguard, and Ally Invest. Most of those exchanges also make money with transaction fees, commissions, as well as additional charges on deposits and withdrawals.

However, of those exchanges, Robinhood is the only one that deals in cryptocurrencies and doesn’t charge any fees. Losing revenue from PFOF could be devastating to a crypto-friendly exchange such as Robinhoold.

The move seems very consistent with recent anti-crypto actions and comments expressed by the SEC chairman. However, there are reports that exchanges could fire back against the SEC and sue it for legislative overreach.

It’s too early to tell whether Gensler or the exchanges will gain the upperhand regarding the issue of PFOF. One thing for sure is that Gensler seems to think he’s the sheriff who can roundup and clear-out the bad guys in the self-described “wild west” of cryptocurrency.