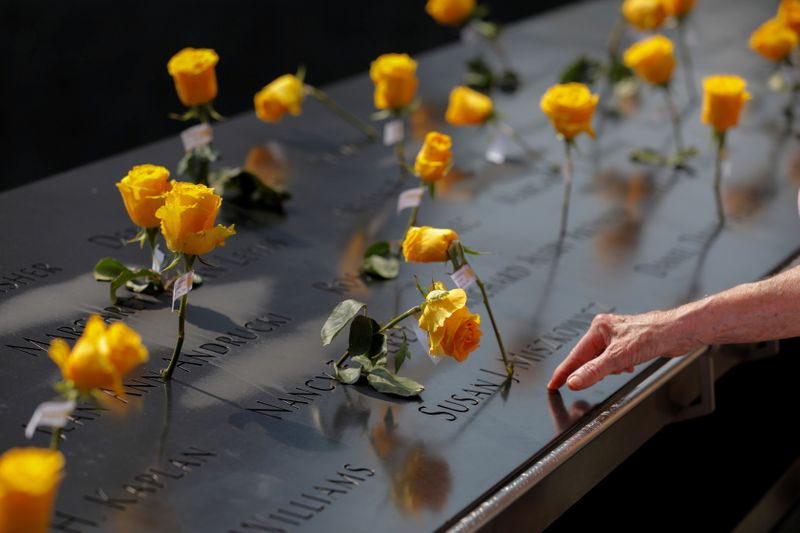 © Reuters. FILE PHOTO: Flowers are seen in the names of victims at the National September 11 Memorial & Museum a month before the 20th anniversary of the September 11 attacks in Manhattan, New York City, U.S., August 11, 2021. REUTERS/Andrew Kelly


NEW YORK (Reuters) – As the United States ends its ‘forever war’ in Afghanistan, a museum in New York is teaching students about the event that set it in motion before they were born: 9/11.

The 9/11 Tribute Museum in Lower Manhattan uses personal tours and first-person accounts from the people who lived through the day when American Airlines (NASDAQ:) Flight 11 and United Airlines Flight 175 crashed into the World Trade Center, to educate a new generation.

“We don’t have a lot of artifacts,” said Joan Mastropaolo, one of about a thousand volunteers who offer guided tours at the museum.

“Our goal here is to share history through the stories of the people who were here on 9/11 … I always like to say that our artifacts are really the heart and soul of our people and their stories.”

Weeks before the 20th anniversary of the Sept. 11 attacks, Mastropaolo welcomed a group of students from Salem, Oregon, telling them about the vibrant neighborhood that surrounded the World Trade Center, where she and her husband lived.

The students listened intently, as Mastropaolo described being a witness to history.

“With my own eyes,” she begins. “I never took my eyes off of that plane. I watched as American Airlines Flight 11 approached the North Tower. No attempt to go around and it got swallowed up into the tower.”

“I’ve seen videos of it from school … But seeing it and being here in person, seeing pictures of people who lost their lives is a whole different thing. And it just was really hard to see,” he said.

“It is so important that we pass this history to the next generation,” Mastropaolo said. “We cannot let this go, forgotten. And so for us, there is a strong passion about ensuring that the younger generation picks up this knowledge and brings it forward as we continue to get older.”