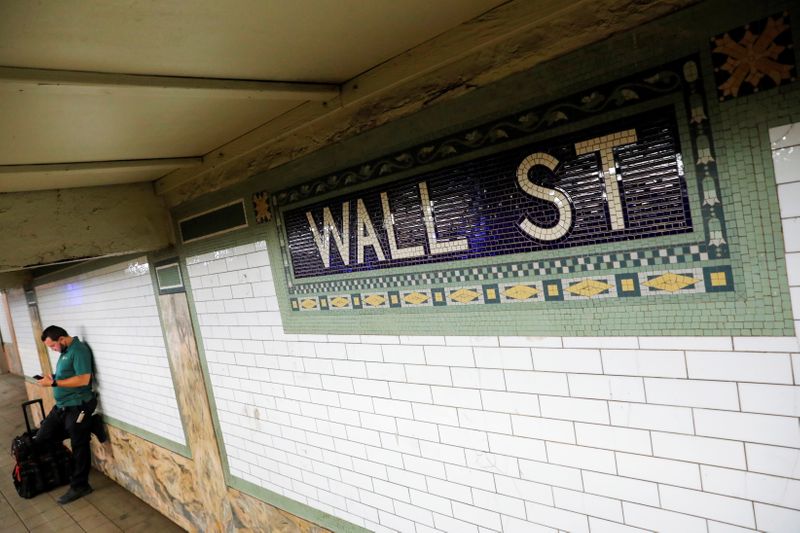 (Reuters) – The Nasdaq ended Friday at a new peak but the other main Wall Street indexes fell, reflecting the mixed sentiment stemming from a disappointing U.S. jobs report which raised fears about the pace of economic recovery but weakened the argument for near-term tapering.

On the final day of trading before the Labor Day weekend, both the and Dow benchmark posted marginal declines, tempering the former’s positive weekly performance and extending the latter’s run of losses to four in the last five sessions.

For the Nasdaq though, registering a fifth win in the last six sessions and a weekly gain of 1.6%, investors’ support of heavyweight technology stocks – which tend to perform better in a low interest-rate environment – continues to drive it higher.

“It’s the anti-COVID sector, where you want to be if you think COVID or a lack of growth is going to be an issue.”

The virus, and its impact on the pace of economic recovery, was evident in the Labor Department’s closely-watched report which showed nonfarm payrolls increased by 235,000 jobs in August, widely missing economists’ estimate of 750,000. Payrolls had surged 1.05 million in July.

“The number’s a big disappointment and it’s clear the Delta variant had a negative impact on the labor economy this summer,” said Michael Arone, chief investment strategist at State Street (NYSE:) Global Advisors in Boston.

“You can tell because leisure and hospitality didn’t add any jobs and retail actually lost jobs. Investors will conclude that perhaps this will put the (Federal Reserve) further on hold in terms of the timing of tapering. Markets may be okay with that.”

The S&P 500 and the Nasdaq had scaled all-time highs over the past few weeks on support from robust corporate earnings, but investors have remained generally cautious as they watch economic indicators and the jump in U.S. infections to see how that might influence the Fed and its tapering plans.

The labor market remains the key touchstone for the Fed, with Chair Jerome Powell hinting last week that reaching full employment was a pre-requisite for the central bank to start paring back its asset purchases.

Among the biggest decliners on the S&P 500 were cruise ship operators, whose businesses are highly susceptible to consumer sentiment around travel and COVID-19. Norwegian Cruise Line (NYSE:) Holdings, Carnival (NYSE:) Corp and Royal Caribbean (NYSE:) Cruises all fell between 3.4% and 4.4%.

A majority of the 11 S&P sectors closed down, with the utilities index the worst performer at 0.8% lower. Economically-sensitive manufacturing and industrials slipped 0.7% and 0.6% respectively.

Banking stocks, which generally perform better when bond yields are higher, dropped 0.4% even as the benchmark jumped following the report. [US/]

“I get the overall market reaction, because it feels a little bit like pricing in a potential policy error from the Fed, but I don’t understand some of the sectors’ reactions today,” said Boston Partners’ Mullaney.

Despite a Labor report number well outside the consensus estimate, the overall reaction of investors was muted, continuing a trend over the last year of a decoupling of significant S&P movement in the wake of a wide miss on the payrolls report.

Volume on U.S. exchanges was 8.37 billion shares, compared with the 8.99 billion average for the full session over the last 20 trading days.

4 No-Brainer Tech Stocks to Buy in September By StockNews