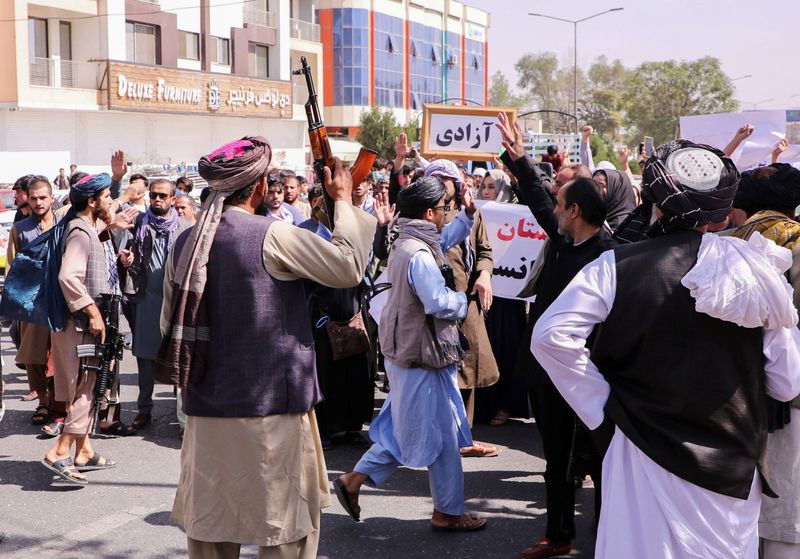 © Reuters. FILE PHOTO: Taliban forces try to stop the protesters, as they shout slogans during an anti-Pakistan protest, near the Pakistan embassy in Kabul, Afghanistan, September 7, 2021. REUTERS/Stringer


GENEVA (Reuters) – The U.N. rights office on Friday said that the Taliban response to peaceful marches in Afghanistan has been increasingly violent, with authorities using live ammunition, batons and whips and causing the deaths of at least four protesters.

Protests and demonstrations, often led by women, pose a challenge to the new Islamist Taliban government as it seeks to consolidate control after seizing the capital Kabul nearly a month ago.

“We have seen a reaction from the Taliban which has unfortunately been severe,” Ravina Shamdasani, U.N. rights spokesperson, told a briefing in Geneva, saying the United Nations had documented four protester deaths from gunfire.

However, she said that some or all may have resulted from efforts to disperse protesters with firing.

She added that the United Nations had also received reports of house-to-house searches for those who participated in the protests. Journalists covering the protests have also been intimidated.

“In one case, one journalist was reported to have been told, as he was being kicked in the head, ‘You are lucky you haven’t been beheaded’,” Shamdasani said. “Really there has been lots of intimidation of journalists simply trying to do their job.”