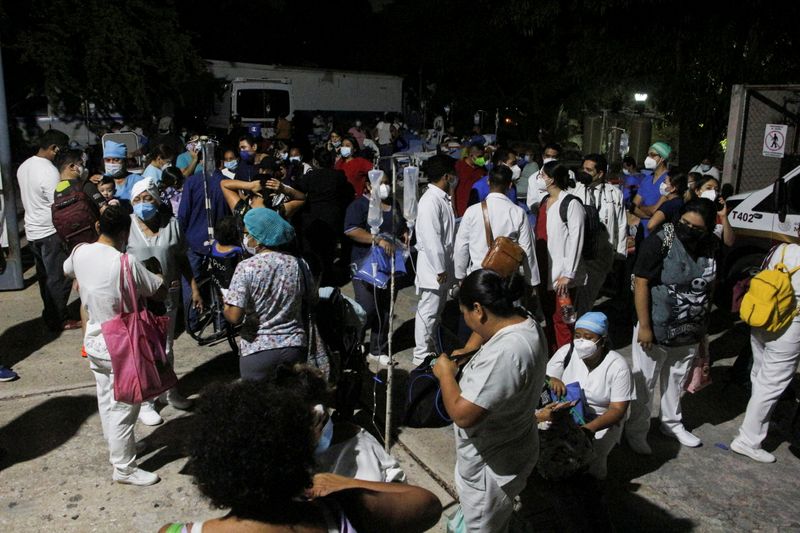 ACAPULCO, Mexico (Reuters) – A powerful earthquake struck Mexico’s Acapulco late on Tuesday, killing at least one man and damaging buildings including the control tower at the beach resort’s international airport.

The 7.0 magnitude quake, which hit 11 miles (17.7 km) northeast of Acapulco in southwestern Guerrero state, downed trees in hillsides around the holiday getaway. In the airport tower, windows were broken and interior ceilings crashed to the floor, images on social media showed.

Large boulders tumbled onto roads in the quake, which caused power outages in several states and in Mexico City.

Another video on social media showed a cloudy night sky lit by lightning flashes as water sloshed from a hillside swimming pool in the city made famous by Hollywood stars in the 1950s.

Many people gathered in the streets amid aftershocks.

“We were only just checking into the hotel, so we have all our things with us,” said Jessica Arias, who was part of a group of eight visiting from Mexico City, the capital. “They told us it’s still not safe to enter.”

Others said they were having dinner or at the cinema when the quake hit.

“We were in shock,” said Andrea del Valle, who was sitting on a pavement with her partner after rushing out of a cinema. “There were no earthquake alarms, so we felt it when it was already happening.”

Authorities reported a gas leak at a café as well as damage to a hotel and a public hospital. They did not say if the airport would operate on Wednesday.

President Andres Manuel Lopez Obrador said the earthquake had not caused major damage in Guerrero, the neighboring region of Oaxaca, Mexico City or any other areas.

Southern and central Mexico is frequently hit by earthquakes. A big one in September 1985 and two in September 2017 prompted so many in the country to wonder if the month is more prone to tremors that a government pamphlet was issued to dispel the myth.

“It was terrible. It really reminds me of the 1985 quake every time something like this happens,” said Yesmin Rizk, a 70-year-old resident of Mexico City’s central Roma Sur neighbourhood. “I’m not sure we’ll sleep tonight.”

The 1985 quake killed thousands of people in Mexico City.

In Roma Sur, lights went off and scared residents rushed out, some in little more than their pajamas, a Reuters witness said. Residents huddled together in the rain, holding young children or pets.

The U.S. Geological Survey (USGS) said Tuesday’s quake, initially measured at a magnitude of 7.4 and later downgraded to 7.0, was relatively shallow, just 12 miles below the surface, which would have amplified the shaking effect.

Mexican state power utility the Comision Federal de Electricidad said in a statement 1.6 million users had been affected in Mexico City, the adjacent State of Mexico, and the states of Guerrero, Morelos and Oaxaca.