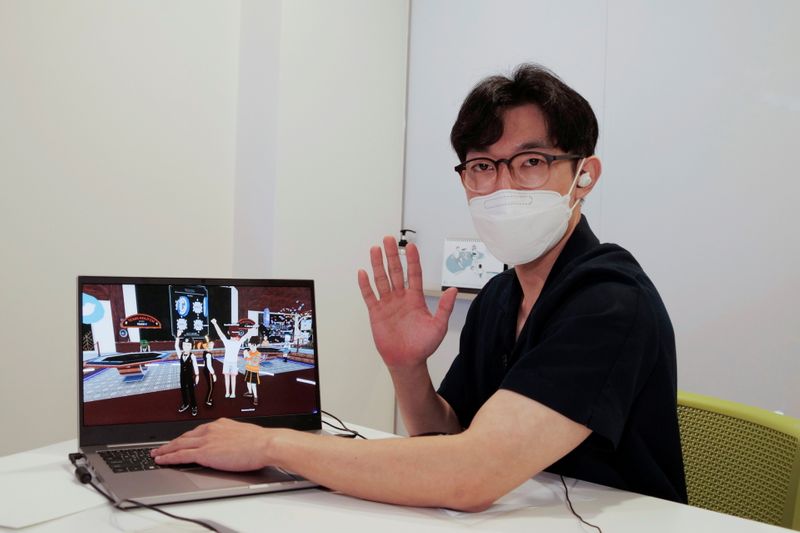 © Reuters. Shaun poses for photographs with a laptop showing his avatar in Decentraland in Seoul, South Korea, August 13, 2021. REUTERS/Daewoung Kim

SEOUL (Reuters) – South Korean engineer Shaun has big plans to develop the parcels of land he has snapped up for millions of won (thousands of dollars) in recent years into long-term moneyspinners.

“I’m planning to design my building which is suitable to host K-pop live performances and K-drama screenings,” the 30-year-old investor told Reuters. “That can probably lead to a profitable business model in two to three years.”

And construction won’t be hampered by any coronavirus pandemic-spurred labour shortages or increased costs. Shaun’s grand project is all in the blockchain-based virtual world Decentraland.

The “metaverse https://www.reuters.com/business/metaverse-bet-crypto-rich-investors-snap-up-virtual-real-estate-2021-04-19” may be a futuristic prospect for most of the world, but it’s increasingly a reality in South Korea where soaring home prices and income inequality have enticed the so-called Generation MZ, or Gen MZ, into alternative online worlds.

Shaun, who declined to be identified other than by the name of his Decentraland avatar, has gradually immersed himself in the platform over the past three years.

Users can buy land in this virtual world with the aim of hosting real businesses there, like a nightclub that charges users for access. Just like in the real world, the success of the businesses and the communities around them can raise the value of your virtual land.

And investment managers, telecom firms and even the South Korean government are all plugging in.

Samsung (KS:) Asset Management expects its Samsung Global Metaverse Fund, launched in late June, to easily beat its goal of drawing 100 billion won ($86.49 million) by the end of 2021, with around 1-2 billion won flowing in everyday.

“With global big tech companies such as Facebook (NASDAQ:) seeing their business direction shifting toward the metaverse, the industry is raking in money,” Choi said.

SK Telecom, the country’s largest mobile carrier, launched a metaverse ‘ifland’ in July where denizens can host and attend meetings with other animated avatars.

“As the social trend shifted to non-face-to-face due to the pandemic era, the demand (for metaverse services) jumped,” an SK Telecom official told Reuters. “There are thousands of rooms being created everyday and tens of thousands of daily users.”

SK Telecom is part of a ‘Metaverse Alliance’ launched by the South Korean government in mid-May that includes more than 200 companies and institutions.

South Koreans have been especially open to the attractions of the metaverse, even though it remains unclear to what extent a full replication of real life is possible, or how long it will take to develop.

Social experts attribute the interest to the disgruntled MZ generation – a term coined in the country that merges Millennials and Generation Z, encompassing those born between 1981 and the early 2010s.

As the coronavirus pandemic has dragged on, a new lexicon has sprung up in South Korea for the “untact” – the opposite of “contact” – economy.

“The craze for the metaverse reflects the sadness and anger of the MZ generation due to polarisation,” said Kim Sang-kyun, an industrial engineering professor at Kangwon National University who has published two best-selling books on the metaverse since late 2020.

“They do not consider the metaverse as an alternative or replacement of reality, instead it’s just another part of their lives,” said Kim. “They are the generation that has communicated with the world through devices since birth, unlike the older generation.”

For 37-year old Choi Ji-ung, it was frustration with real estate prices and regulations in the physical world that drove him to buy property in geolocation-based platform Earth 2.

Choi’s 50 million won investment in the pricey Gangnam district in Seoul on Earth 2 is something he can only dream of in the real world.

“It was easy to purchase and not as expensive as I thought,” he said.

Fuelling many of the metaverse platforms are non-fungible tokens (NFT), intangible digital assets encompassing everything from artworks and videos to clothes and avatars, which are purchased with cryptocurrency.

Decentraland offers a limited number of digital land parcels, or LAND, in the form of NFTs that are acquired using MANA, a fungible token that acts as the game’s currency. MANA, an altcoin, can be purchased with fiat currency on limited cryptocurrency exchanges or in a swap with digital currencies like bitcoin or ether.

As in the real world, land parcels located closer to popular districts are more valuable than others. Some land parcels that sold for about $20 each when Decentraland launched in 2017 now change hands for hundreds of thousands of dollars.

As the platform develops, Shaun and other landowners believe they will be able to make money by using their land for a variety of commercial businesses, such as building concert venues and charging admission for performances.

Changes and developments to Decentraland are overseen by the Decentraland Foundation, which was set up as a nonprofit organization to act on behalf of users.

Wang Keun-il, a 36-year-old fintech entrepreneur, owns lands in North Korea’s capital Pyongyang, Vatican City and Egypt on Earth 2, where he plans to build a profitable tourism or educational business.

Earth 2, which launched in November, is not a fully-fledged metaverse environment, but rather a marketplace for selling digital tiles which represent parts of the Earth. Users cannot currently “enter” the land they have bought, meaning Wang has taken a gamble on a world that is yet to materialise.

Earth 2 Chief Executive Shane Isaac told Reuters South Koreans were the most active users on the platform, based on self-affiliation, spending about $9.1 million, followed by the United States with $7.5 million and Italy with $3.9 million.

Decentraland said its platform had more than 7,067 active users from South Korea in the 30 days to Sept. 1, second only to the United States.

“People won’t forget about or move away from the industry once things return to something resembling normality,” Dave Carr, a communications lead for Decentraland Foundation, told Reuters.

“If anything, this period will define the most important, valuable or relevant entities and experiences.”

Earth 2 investor Choi is conscious of potential metaverse pitfalls but excited: “Depending on the point of view, some could see it as a ridiculous thing or a bubble, but some see it as an opportunity.”