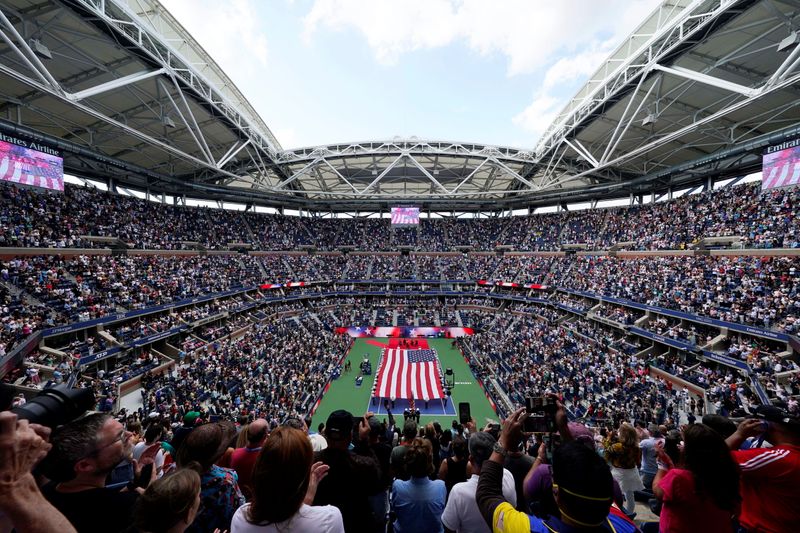 © Reuters. Sep 11, 2021; Flushing, NY, USA; An American flag is unfurled during a ceremony observing the 20th anniversary of the 9/11 terror attacks prior to the match between Leylah Fernandez of Canada and Emma Raducanu of Great Britain (both not pictured) in the w

NEW YORK (Reuters) – Before he died responding to the Sept. 11, 2001, attacks at the World Trade Center, Brian McAleese, a New York City firefighter and father of four, often shopped at the Key Food supermarket in Brooklyn where Artie Bentley worked for nearly 40 years.

Twenty years later, Bentley wore Brian’s name on a baseball hat as he headed to Citi Field on Saturday to watch his New York Mets take on their crosstown rival New York Yankees following a ceremony marking the occasion.

With flags around the stadium flying at half-staff, members of the city’s first responder agencies, as well as former Mets players who contributed to the relief efforts, encircled the field before the game. Bobby Valentine and Joe Torre, who managed the Mets and Yankees respectively in 2001, delivered the ceremonial first pitch.

Baseball offered a small measure of solace to a grieving city in 2001. On Sept. 21 that year, the Mets took on the Atlanta Braves at their old home field, Shea Stadium, for the city’s first major sporting event since the attacks, with President George W. Bush throwing out the first pitch.

In the bottom of the eighth inning, Mike Piazza, the Mets’ star catcher, slammed a dramatic home run to propel New York to a win and give the crowd a moment of joy after days of devastation and sorrow.

“That was something,” said John Tully, 56, a retired New York City police officer who attended Saturday’s game wearing a shirt with the names of two officers who died on Sept. 11, including a friend, Ramon Suarez. “Sports has a way of doing that.”

As they did in 2001, many of the Mets and Yankees players wore baseball hats bearing the logos of the New York City police and fire departments and other first responder agencies.

At the U.S. Open tennis tournament next door, the crowd at Arthur Ashe Stadium observed a moment of silence and female cadets unfurled a giant American flag across center court before the women’s championship match. The date “9/11/01” was written in white to one side of the net.

Leylah Fernandez, the 19-year-old Canadian who lost to fellow teen Emma Raducanu of Britain, saluted the city after the final.

“I know on this day it was especially hard for New York and everyone around the United States,” she told the crowd. “I just want to say that I hope I can be as strong and as resilient as New York has been the past 20 years.”