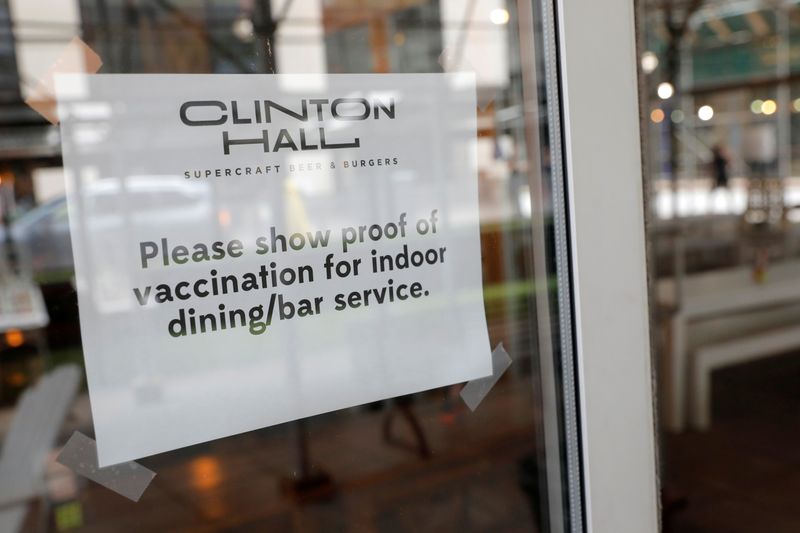 © Reuters. Signage is seen on a window in a restaurant as the vaccine mandate commenced during the outbreak of the coronavirus disease (COVID-19) in Manhattan, New York City, U.S., August 17, 2021. REUTERS/Andrew Kelly

By Ben Klayman and Timothy Aeppel

(Reuters) – Small employers like Bob Roth on Friday voiced frustration with U.S. President Joe Biden’s mandate that workers either get vaccinated or tested regularly to combat the spread of the coronavirus.

The co-owner of RoMan Manufacturing, a producer of transformers and glass-molding equipment in Grand Rapids, Michigan, supports vaccination but worries about increased costs, such as for testing and administration, that small companies like his will be forced to bear. He called the new mandate “encroaching.”

“It’s easy when you sit in Washington, D.C., to say the employers will handle it,” he said.

On Thursday, Biden took aim at vaccine resistance, announcing policies requiring most federal employees to get COVID-19 vaccines and large employers to ensure their workers are vaccinated or tested weekly. The new measures would apply to about two-thirds of all U.S. employees, who work for businesses with more than 100 workers.

“If we are required to mandate vaccines or weekly testing, we will certainly comply,” railroad operator Union Pacific Corp (NYSE:) said in a statement.

Executives said Biden’s new mandate provides cover for companies that want to raise their vaccination rates. But RoMan’s Roth said it presents a challenge at a time when his 160-employee company is struggling to fill 18 open jobs.

RoMan’s vaccination rate has been stuck at 54%, and Roth stopped paying employees $50 each to get vaccinated when it became clear no more were stepping forward.

Andreas Weller, chief executive of auto aluminum parts maker Aludyne, which employs about 3,000 people in the United States, said the mandate creates a “substantial burden” on companies. With several hundred job openings, Weller also fears the potential “devastating impact” on hiring and job retention the mandate could have.

Arnold Kamler, CEO of bike maker Kent International, was “delighted” with the mandate, however. His company operates an assembly plant in South Carolina, where only 80 of 140 workers have been vaccinated.

“If they don’t want to be tested on a weekly basis, I’ll wave goodbye to them gladly because that’s selfish and irresponsible,” he said of his workers, whom he notified of the mandate on Friday morning.

Roth feels that the mandate’s effectiveness will be questionable given the religious and health exemptions allowed under Title VII and the Americans with Disabilities Act. On Wednesday, United Airlines said employees who receive religious exemptions for vaccinations will be placed on temporary, unpaid personal leave starting next month.

Even before the mandate, many companies resorted to incentives for their employees to get vaccinated, and some are turning to disincentives.

States also will play a critical role in enforcing the mandate and support there varies, company executives said. In historically more conservative Indiana, Governor Eric Holcomb on Friday said a vaccine mandate was not the answer.

“The announcement from President Biden is a bridge too far,” he said in a statement. “Private businesses should be able to look at their own mission, their staff and their goals and make the decision best for them that will keep their doors open.”

Japan stocks lower at close of trade; Nikkei 225 down 0.67% By Investing.com

Australia stocks higher at close of trade; S&P/ASX 200 up 0.32% By Investing.com