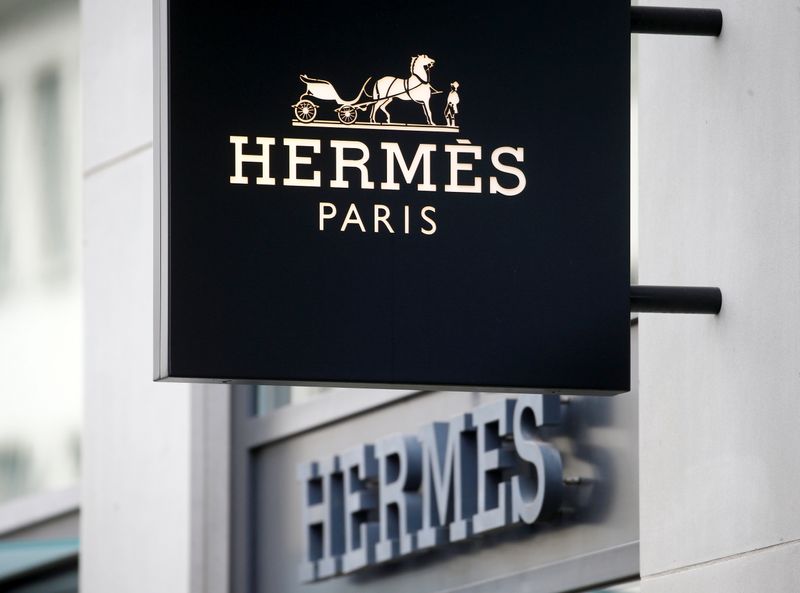 © Reuters. FILE PHOTO: The logo of French luxury group Hermes is seen at a store, as the spread of the coronavirus disease (COVID-19) continues, in Zurich, Switzerland February 17, 2021. REUTERS/Arnd Wiegmann


PARIS (Reuters) -Sales at Birkin handbag maker Hermes (PA:) powered ahead in the second quarter, more than doubling from a year earlier as lockdowns eased around the world and shoppers, particularly in Asia and the United States, flocked back to stores.

The luxury goods industry, which suffered an unprecedented sales contraction last year, has bounced back sharply in 2021, with Hermes rivals like LVMH and Kering (PA:) also benefiting.

Hermes said sales at constant currencies were up 127% at 2.15 billion euros ($2.55 billion). That was 33% above where they stood in the first half of 2019, before the coronavirus pandemic.

Executive Chairman Axel Dumas called the results exceptional and said Hermes, unlike some rivals, had not postponed investments during the health crisis and had kept renovating stores and opening new ones, including one in Detroit in June. The group has hired around 400 people so far this year.

Sales in the first six months in Asia excluding Japan rose 87%, while in the Americas they surged by 115%, accelerating in the second quarter, the group said.

Some analysts say that the industry may be heading for a slowdown in the second half of this year, as comparisons with 2020 become tougher. HSBC said Hermes could also be at a disadvantage because of its self-imposed production limits – the group historically has waiting lists for its most iconic wares.

Dumas told reporters that the group does not set production levels to reach a certain turnover but to ensure it can deliver the best quality.