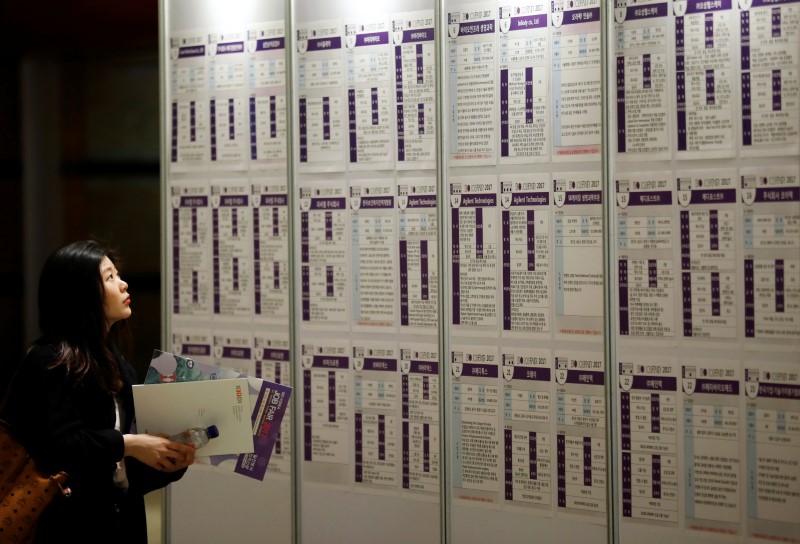 SEOUL (Reuters) -South Korea’s August unemployment rate fell to the lowest on record, suggesting the economic recovery from the COVID-19 pandemic was on track, though a breakdown of data showed labour conditions in the key manufacturing sector remained weak.

The seasonally adjusted unemployment rate in August dropped to 2.8%, Statistics Korea data showed on Wednesday, the lowest since data releases began in June 1999 and the third straight month of decline. The rate stood at 3.3% in July.

Jobs were mostly added in healthcare and social services, construction, and transportation and warehouses, the data showed.

Labour conditions in the key manufacturing sector, however, remained weak, with the number of employed falling to an eight-year low of 4,289,000 – 76,000 less than the comparable month in 2020.

Jobs in retailers also continued to slump, losing 113,000 jobs from a year earlier, and there were 38,000 less jobs in accommodation facilities and restaurants.

The lack of jobs growth in the core manufacturing sector and for workers in their 30s, 40s and 50s was a concern as government-led public, healthcare and social services sector jobs made gains, Lee added.

The jobless rate for those aged 15 to 29 was 5.8% in August, but the real rate, known as the ‘expanded unemployment rate’ – which combines the unemployed with part-time and temporary jobholders, and those who gave up looking for jobs or who are preparing for state examinations – was 21.7%.

Workplaces may come under further pressure as South Korea continues to battle its worst wave of COVID-19 infections, fanned by the more transmissible Delta variant.

The country has extended social distancing curbs to at least Oct. 3 as the country boosts vaccinations ahead of a Chuseok holiday, also known as Korean Thanksgiving Day, next week.

The nation has registered a total 275,910 infections since the pandemic started, with 2,367 deaths. Just 40% of the 52 million population are fully vaccinated

The Bank of Korea currently forecasts the annual unemployment rate at 3.9% for this year and 3.8% for next.

How Difficult Is It To Make Money From Horse Racing Handicapping

What is Crucial for Crypto Exchange Platforms? By DailyCoin