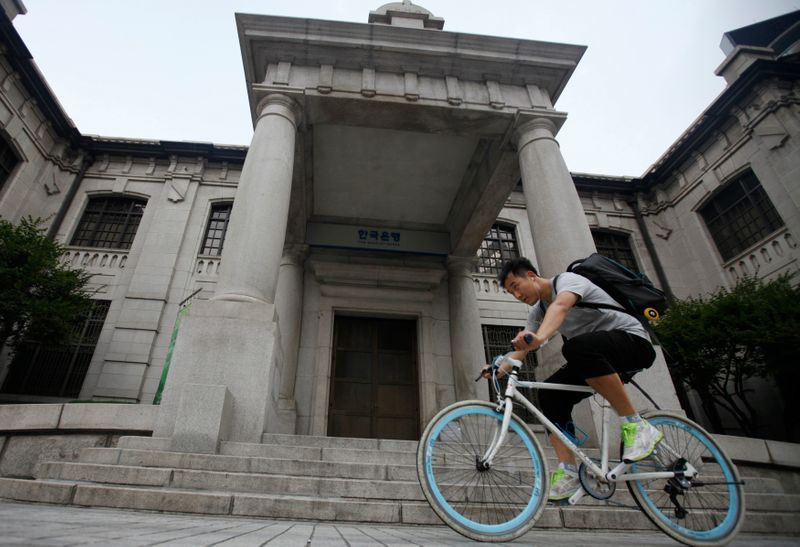 © Reuters. FILE PHOTO: A man gets on a bicycle in front of the Bank of Korea in Seoul August 9, 2012. REUTERS/Kim Hong-Ji

The Bank of Korea raised its policy rate by 25 basis points to 0.75% in August, hiking for the first time in almost three years to become the first major Asian central bank to shift away from pandemic-era monetary stimulus.

The central bank said in a monetary policy report that a 25 basis point rate hike should help trim household debt growth by 0.4 percentage points within the first 12 months, signalling conditions are building for further policy tightening.

The BOK said it would gradually adjust monetary policy going forward given “inflation is expected (to) accelerate above 2% for the time being.”

South Korea’s consumer prices rose 2.6% in August from a year earlier, according to recent data, above the central bank’s official inflation target of 2%.

Rate cuts worth 75 basis points since last year and ample fiscal stimulus have helped fuel South Korea’s strong recovery from the COVID-19 pandemic, putting the BOK at the forefront of stimulus withdrawal globally.

With the economy now on relatively healthy footing, policymakers have flagged in recent weeks the possibility of more rate hikes amid a debt binge in the country. In the June quarter, bank lending to households saw the biggest annual increase since the central bank began releasing relevant data in 2003.

Analysts expect the BOK to raise interest rates further this year and next, according to a Reuters poll conducted in late August, with most seeing the base rate at 1.25% by the end of 2022.