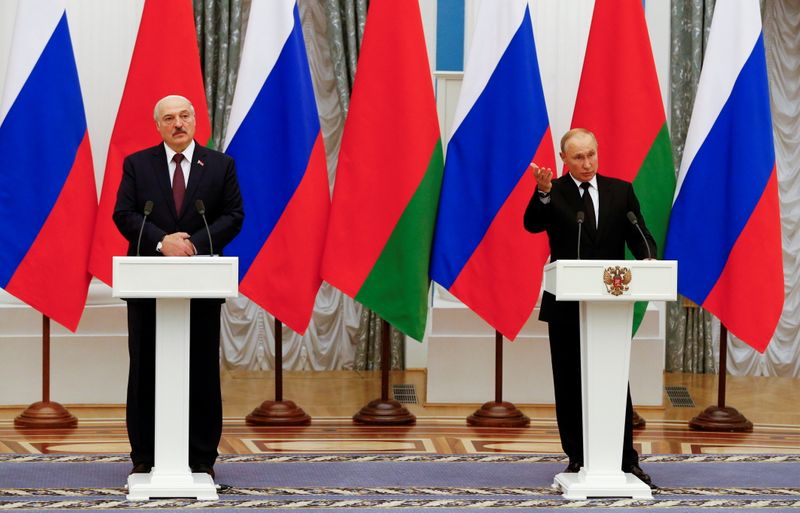 
MOSCOW (Reuters) – The leaders of Russia and Belarus on Thursday agreed to set up a unified oil and gas market and to deepen economic integration in the face of what they regard as unjustified Western sanctions on both their economies.

The agreement, reached after Kremlin talks between Russian President Vladimir Putin and Belarusian leader Alexander Lukashenko, is likely to be seen as the latest show of support by Putin for Lukashenko who last year used force to break up huge protests against his rule.

The West has hit Belarus with sanctions to punish the authorities for the crackdown. Russia is under Western sanctions too for its treatment of Ukraine.

Moscow and Minsk have long been formally part of a “union state” and held talks about further integration. That has prompted concerns from the beleaguered Belarusian opposition that Lukashenko will trade off chunks of sovereignty in return for even more backing from the Kremlin against the West.

The two leaders told a news conference that they had agreed to 28 integration road maps that covered common approaches to macro-economic policies, including monetary policy, taxes and custom rules.

They also announced plans to integrate their energy markets.

Putin said the two countries would sign a document before December 2023 to create a unified gas market and conclude similar agreements for oil and electricity.

“And we are not even going to index the price for Belarus in terms of dollar inflation even though it is significant,” Putin said.

Russia, which sees the ex-Soviet republic of 9.5 million as a strategically-important buffer to its west, has helped keep Lukashenko in power with loans and political backing.

Such support helped him weather last year’s protests which were widely regarded as the biggest challenge to his 27-year rule and were called to try to overturn what the opposition said was his rigged election win.

Putin said Russia would provide Belarus with around $630-640 million in loans by the end of 2022.

He said the two countries were focusing on economic integration before discussing potential political integration.

The talks happened on the same day that Russia and Belarus formally opened vast joint military drills, a week-long exercise across the territory of both countries and in the Baltic Sea that has alarmed some NATO countries.

Putin said it made sense for Russia and Belarus to hold the drills near their western borders given what he said were moves by NATO to bolster its presence in the wider region.