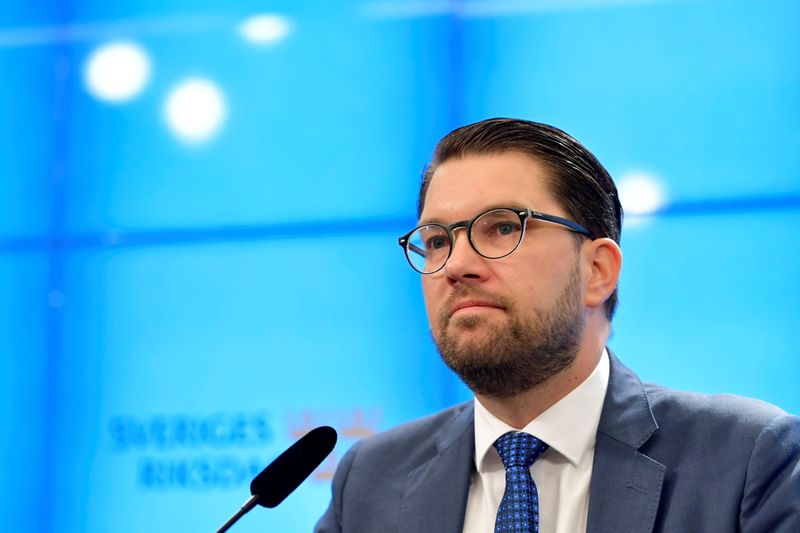 
STOCKHOLM (Reuters) – The chances of Sweden’s minority, centre-left coalition passing its autumn budget and avoiding a snap election increased on Friday after the head of the opposition Sweden Democrats said his party would not back an alternative finance bill.

The maths remains complex, but without the Sweden Democrats, the centre-right opposition would likely only get 112 votes in the 349-seat parliament for a common budget against the 116 commanded by the Social Democrat-Green government.

“As it looks now, there is no reason for us to support a budget when we have not been part of the discussions during which it was formulated,” Sweden Democrat leader Jimmie Akesson told daily Expressen in an interview.

Sweden’s budget rules mean that the finance bill with the biggest backing in parliament is adopted.

Finance Minister Magdalena Andersson – the favourite to take over as prime minister when Stefan Lofven steps down https://www.reuters.com/world/europe/swedish-pm-lofven-says-step-down-november-2021-08-22/?taid=61228ac8ced6e00001765f17&utm_campaign=trueAnthem:+Trending+Content&utm_medium=trueAnthem&utm_source=twitter in November – has promised a 74 billion crown ($8.6 billion) boost https://www.reuters.com/article/sweden-economy-idUSL8N2PX4DC to the economy in the budget for 2022.

But the chances of the bill passing have looked uncertain.

Without support for the coalition from the Left and Centre parties, a united opposition could have forced an alternative finance bill through parliament, likely causing a snap election.

Neither the Left nor Centre party have said they would back the finance bill – which will be published on Sept. 20 – and both have very different political priorities.

Complicating matters further, the Centre Party – which sat in the right-of-centre government from 2006 to 2014 – has said it would not support a budget if the government negotiates its content with the Left Party. The Left Party said it wanted a say in spending.

Sweden is due to hold a general election in September 2022, and all parties are keen to avoid two votes in one year.