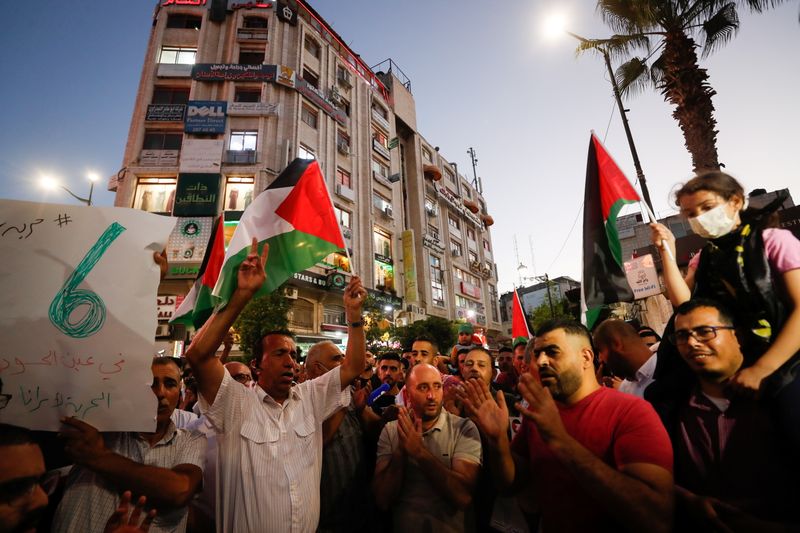 © Reuters. Demonstrators take part in a protest in solidarity with Palestinian prisoners in Israeli jails, in Ramallah in the Israeli-occupied West Bank September 8, 2021. REUTERS/Mohamad Torokman

RAMALLAH, West Bank (Reuters) – A few hundred Palestinians held protests in the occupied West Bank on Wednesday in support of six militants who broke out of a maximum security Israeli jail this week in an escape that has boosted Palestinian spirits and alarmed Israelis.

Israeli forces have mounted a search in an effort to capture the six Palestinian men who on Monday had escaped through a hole in the floor of a prison cell. The inmates, five of whom are members of the Islamic Jihad militant group and one of the Fatah group, have either been convicted or are suspected of planning or carrying out deadly attacks against Israelis.

Around 500 Palestinians gathered at nightfall in the cities of Ramallah, Bethlehem, Hebron and other West Bank locations, some chanting “freedom” and waving Palestinian flags.

“We came out in solidarity with our prisoners in the occupier’s jails,” said Jihad Abu Adi, 25, as protesters nearby set tyres ablaze. “It’s the least we could do for our heroic prisoners.”

The Israeli Prison Service said that in at least two jails, a few Palestinian prisoners had set fire to their cells. Details of Monday’s prison break investigation are under an Israeli court-issued gag order.

Palestinians regard brethren jailed by Israel as heroes in a struggle for statehood. Israel says Palestinians involved in violent anti-Israeli activities are terrorists and is concerned Monday’s escape could ignite clashes in the West Bank and Gaza.

Israeli Prime Minister Naftali Bennett held consultations with defence and security chiefs on Wednesday, his spokesman said in a statement. “The events have the potential to impact numerous fronts,” the statement said. “Israel is prepared for any scenario.”