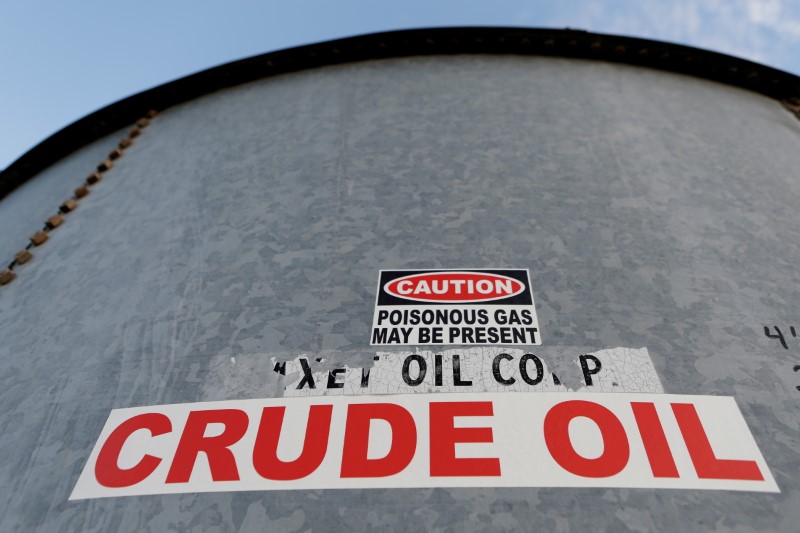 © Reuters. FILE PHOTO: A sticker reads crude oil on the side of a storage tank in the Permian Basin in Mentone, Loving County, Texas, U.S. November 22, 2019. REUTERS/Angus Mordant

SINGAPORE (Reuters) – Oil prices climbed on Wednesday after industry data showed a larger than expected drawdown in crude oil stocks in the United States, the world’s largest oil consumer, and on expectations that demand will recover as vaccine roll-outs widen.

“The impact of Hurricane Ida was a lot greater than many anticipated and production in the Gulf of Mexico region might struggle to return until Tropical Storm Nicholas is done punishing the region with torrential rain,” said Edward Moya, senior analyst at OANDA.

Tropical Storm Nicholas moved slowly through the Gulf Coast on Tuesday, drenching the states of Texas and Louisiana with torrential rain, flooding streets and leaving hundreds of thousands of homes and businesses without power.

Texas refineries continued to run normally, though, despite the flooding and power outages.

The damage from Nicholas comes just two weeks after Hurricane Ida knocked a significant amount of refining capacity offline in the Gulf Coast this month.

Meanwhile, after a three-month slide in global oil demand due to the spread of the Delta variant of the coronavirus and renewed pandemic restrictions, vaccine roll-outs are set to power a rebound, the International Energy Agency (IEA) said on Tuesday, also helping to lift prices.

Details on China’s plans to sell crude from strategic reserves pressured prices, however, with China’s state reserves administration saying it would auction off 7.4 million barrels of crude on Sept. 24.

Arctic Oil and Gas Exploration Is Booming Despite Climate Fears