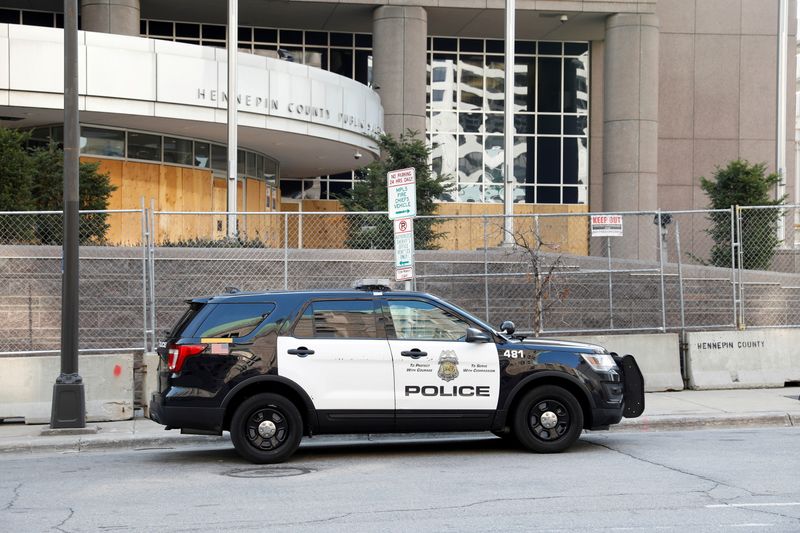 © Reuters. FILE PHOTO: A Minneapolis Police Department vehicle is parked near the boarded-up Hennepin County Public Safety Facility, while the fifth day of trial continues for Derek Chauvin, who is facing murder charges in the death of George Floyd, in Minneapolis,

(Reuters) – The Minnesota Supreme Court ruled on Thursday that voters could consider a ballot measure to replace the Minneapolis Police Department with a Department of Public Safety following the killing of George Floyd by a police officer.

The 11th-hour decision, issued by Minnesota’s top court one day before early voting is scheduled to begin in local elections, overturns a federal judge who said the language of the so-called Question 2 was confusing and potentially misleading.

The proposal, an amendment to the city’s charter, was crafted by members of the Democrat-dominated city council after the May 25, 2020, death of Floyd, 46, under the knee of ex-police officer Derek Chauvin.

Floyd’s death, caught on film by a bystander, touched off a nationwide summer of sometimes violent protests over police brutality, especially toward young Black men.

The proposed amendment would remove a requirement from the Minneapolis charter that the city maintain a standing police department with a minimum number of officers.

In its place, Minneapolis would create a new department using a “comprehensive public health approach.”

Critics of the measure, including Democratic Governor Tim Walz, say the duties and staffing of the proposed Department of Public Safety were too vague.

Chauvin was convicted of Floyd’s murder in April. He was sentenced in June to more than 22 years in prison.

The other three officers still face a state court trial on charges stemming from Floyd’s death.

On Thursday, Chauvin pleaded not guilty in a separate criminal case https://www.reuters.com/world/us/chauvin-convicted-floyds-murder-pleads-not-guilty-violating-teens-rights-2021-09-16 to violating the civil rights of a Minneapolis teenager by using a neck restraint similar to the one that killed Floyd.