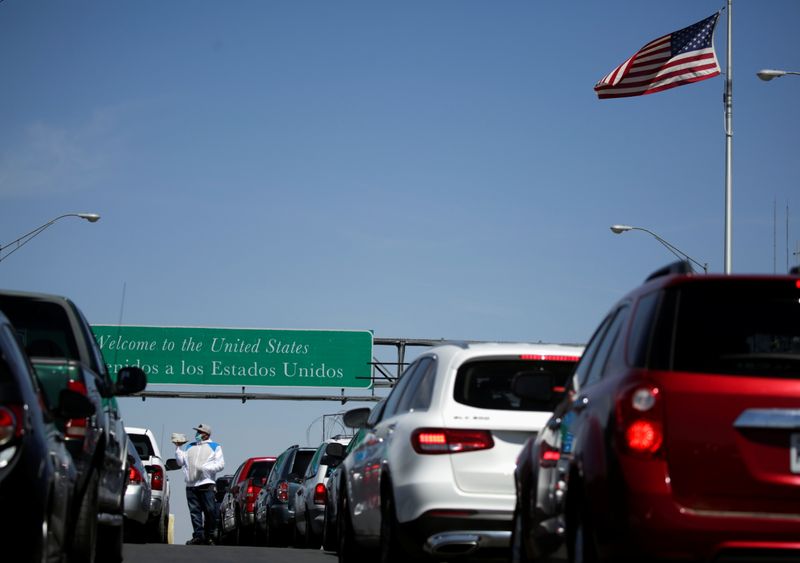 © Reuters. Vehicles wait in line to cross the Cordova Bridge of the Americas (El Paso CBOA) towards El Paso, Texas, U.S., as Mexico’s Department of Foreign Relations requested another month-long extension on land-crossing restrictions at the U.S.-Mexico border due t

MEXICO CITY (Reuters) – Mexican foreign minister Marcelo Ebrard said on Wednesday that upcoming high-level economic talks with the United States will focus on infrastructure along the border to facilitate trade and movement of people, semiconductors and cybersecurity.

Mexico will use the so-called High-Level Economic Dialogue on Sept. 9 with the United States, which will restart after a four-year gap, to accelerate investment in Mexico, Ebrard said in a video shared on Twitter (NYSE:).

The talks will touch on “issues such as infrastructure at the border, what we have to do so that the difference between one side and the other is closed and we can facilitate trade and transit of people,” Ebrard said.

Mexico’s delegation, which also includes Economy Minister Tatiana Clouthier, would discuss investment in Central America with an aim to curb migration “so that people do not have to migrate for reasons of poverty and insecurity,” Ebrard said.

Electric mobility, cybersecurity, semiconductors and Mexico’s automotive industry would also be on the agenda, he said.

For the United States, the talks would be led by Vice President Kamala Harris, Ebrard said. U.S. Secretary of State Anthony Blinken would also attend.