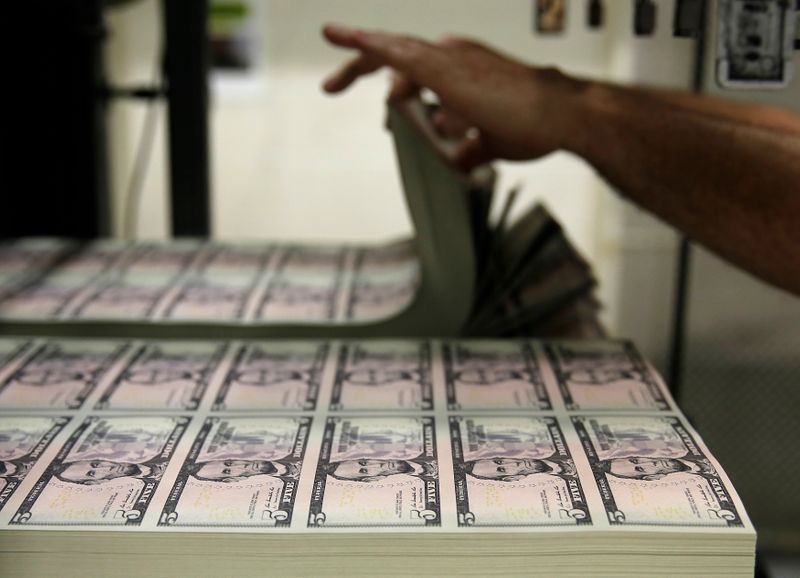 © Reuters. Sheets of former U.S. President Abraham Lincoln on the five-dollar bill currency are fanned out at the Bureau of Engraving and Printing in Washington March 26, 2015. REUTERS/Gary Cameron

LONDON (Reuters) – With one eye on the economic disruption from COVID-19’s Delta variant, financial markets are just as concerned about a different “delta”: the ebbing rate of global credit creation.

As ever, market pricing is driven more by new developments than the absolute. The latest change, expressed in mathematics by the Greek letter delta, matters most in setting prices. It’s why economic data and corporate earnings ‘surprises’ typically move markets and not the overall level of national output or company profits per se.

And so while some investors struggle to see where this post-pandemic equity bull market will end while interest rates remain so low, global liquidity so plentiful and growth so strong, strategists warn that the direction of travel on all these should give ample cause for concern.

The aggregate global pool of liquidity generated by central banks and private credit – which many see as the dominant driver of world asset pieces – is still swelling. But the change of that growth, otherwise known as the delta or “credit impulse”, is slowing sharply and could soon be negative.

Citi’s global markets strategist Matt King points to the combination of slower central bank bond-buying and bank reserve creation, weak private credit growth and the near end of the U.S. Treasury’s rundown of its cash pile at the Federal Reserve.

King, who early in the year identified this drawdown of the Treasury General Account (TGA) as a potential second wave of global liquidity to lift markets, said the weakening overall credit impulse now bears watching.

“The hope is that, with real yields still low, this may imply merely a reduction in current market exuberance,” he wrote this week. “But history argues for greater caution.”

“It typically takes a positive delta to keep markets rallying – and immediate prospects for both the credit and the COVID deltas seem overwhelmingly negative.”

King’s number crunch of this credit impulse looks at the six-monthly rate of change of bank reserves created by the world’s largest central banks as they buy bonds from the market. Taking account of moderate reductions of Fed and European Central Bank bond buying by year-end, he calculates the pace of bank reserve growth is likely to halve from this year’s highs.

The near end of the trillion-dollar TGA rundown, which mechanically boosted U.S. bank reserves at the central bank, is partly responsible.

But the bigger slowdown he flags is in the pace of private credit creation – which made up some two-thirds of the $17 trillion of new credit created last year, with central banks making up the rest.

Measured by a rolling 12-month change in flow of new private credit, this credit impulse – weakened by a slowdown in China, high corporate cash levels and government supports during the pandemic – is on the verge of turning negative in every region, King estimates.

Nikolaos Panigirtzoglou’s flows and liquidity team at JPMorgan (NYSE:) reckons the liquidity impact from Treasury’s $1.35 trillion drawdown of its Fed account was offset by the related drop of more than $900 billion in outstanding Treasury bills and also the Fed’s trillion-dollar-plus daily reverse repo operations.

But JPMorgan stressed that growth of central bank bond-buying and private sector loan growth were more important to world markets medium term and both these were indeed weakening.

Global flow analysis can be nebulous, however.

One broad assumption is a reduction of central bank bond-buying and liquidity will lead to higher benchmark borrowing rates and choke off the flow the credit generally.

But liquidity analyst Mike Howell’s CrossBorder Capital cast doubt on whether this rings true – not least given the seemingly “perverse” slide in U.S. Treasury yields this summer even as growth and inflation spiked, and Fed tapering and a resumption of big Treasury debt sales loomed.

However, measures of “excess liquidity” that net out new government debt sales over central bank buying actually correlate positively with so-called term premia in bond yields – the part of yields capturing the uncertainty of holding bonds over the long-term.

So as excess liquidity ebbs this year, so too have these term premia – the opposite of what most textbooks and policymakers might suggest.

CrossBorder explains this by saying less Fed liquidity creation may lead to more demand for “safe” bonds – either as a defensive move against more corporate defaults or possibly even to use them as “pristine” collateral in repo transactions to raise the lost liquidity that way instead.

Similarly, the depletion of liquidity due to higher debt sales may also spur demand for that safe bond collateral to get the maximum cash via repo.

Ultimately though, CrossBorder sees this as a function of soaring overall debt levels that have to be financed by liquidity creation, one way or another, and can sap global economic growth in the process.

“Rising debt levels may explain the perverse response: we have too much debt, not too much liquidity,” it concluded.