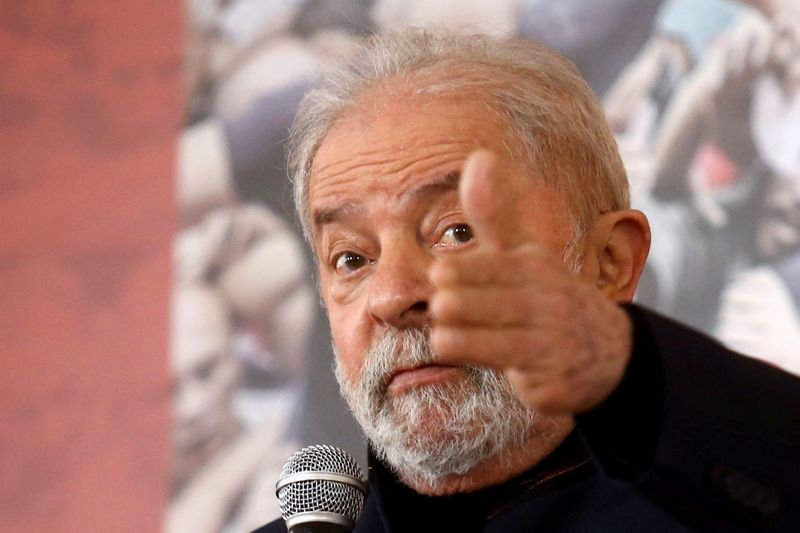 © Reuters. FILE PHOTO: Former Brazilian President Luiz Inacio Lula da Silva gestures as he attends the release of the book “Why is Lula innocent and why they tried to destroy the greatest leader of Brazil”‚ in Sao Paulo, Brazil August 12, 2021. REUTERS/Carla Carni

Voter support for Lula slipped to 44% from 46% in July, and Bolsonaro gained a percentage point to 26%, according to the poll, which asked voters to chose as if the election were now.

In a simulated runoff between the two, Lula would win 56% of votes versus 31% for the incumbent, compared to a 58%-31% advantage in the last poll. The variation since July fell within the poll’s margin of error.

Other polls also show Lula’s clear advantage as Bolsonaro’s popularity slips due to rising inflation, high unemployment and his handling of the world’s second-deadliest COVID-19 outbreak.

Neither candidate has officially announced his candidacy for the October 2022 election.

Datafolha said the survey showed rallies held by Bolsonaro on Sept. 7 to seek support in his clash with the Supreme Court have not modified the electoral outlook.

Centrist candidates have not gained traction either, disappointing parties angling for a third option to break up a polarized Lula-Bolsonaro race. Right-wing groups calling for a “Neither Lula Nor Bolsonaro” rally on Sept. 12 failed to draw much of a crowd in Sao Paulo.

Voter support for Ciro Gomes of the center-left Democratic Labor Party (PDT) and governors Joao Doria and Eduardo Leite, both of the center-right Brazilian Social Democratic Party (PSDB), remains in the single digits.

Bolsonaro’s popularity has hit the lowest point since taking office in 2019, the Datafolha poll showed in data released on Thursday, with 53% of respondents disapproving of him compared to 51% in the previous survey in July.

His positive ratings fell to 22% from 24%, Datafolha said. The poll suggests Bolsonaro’s attacks on the Supreme Court have not resonated with voters concerned about rising prices and a lack of work.

The Datafolha poll took place between Sept. 13-15, interviewing 3,667 people in person across Brazil, with a margin of error of two percentage points up or down.