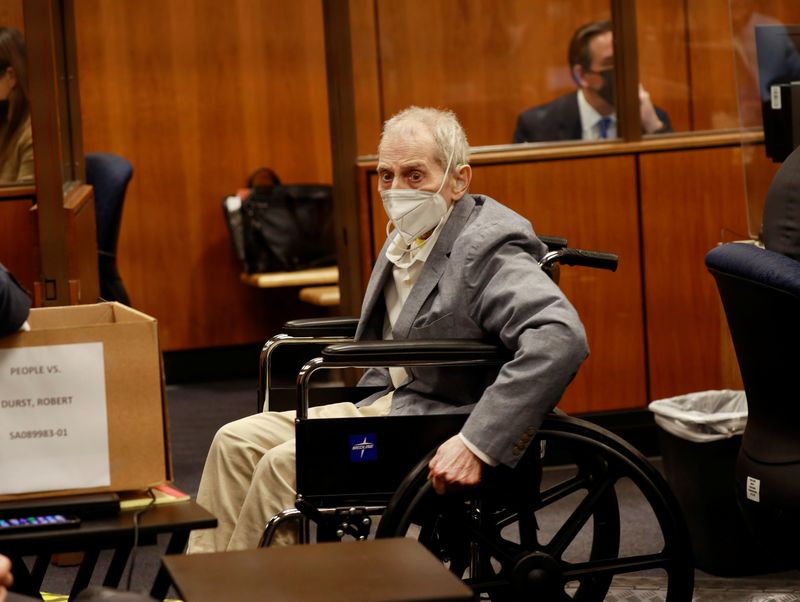 © Reuters. Robert Durst in his wheelchair looks at people in the courtroom as he appears in an Inglewood courtroom with his attorneys for closing arguments in his murder trial at the Inglewood Courthouse in California, U.S., September 8, 2021. Al Sieb/Pool via REUT

(Reuters) – Los Angeles County prosecutors on Wednesday likened Robert Durst’s testimony in his murder trial to cockroach soup, displaying a photograph of a bowl full of bugs in court to suggest all his testimony should be discarded.

Closing statements began in the trial of Durst, a multimillionaire real estate heir accused of killing his friend Susan Berman at her Beverly Hills home, where she was shot in the back of the head in 2000.

Prosecutors allege Durst killed Berman because she knew too much about the disappearance of his wife Kathleen McCormack Durst in 1982.

Durst, 78 and ailing, testified in his own defense for 15 days, nine on cross examination, when prosecutors revealed multiple times Durst had lied or changed his story.

The trial is nearing its conclusion six years after Durst’s apparent confession to multiple killings in the HBO television documentary series “The Jinx.”

Durst denied killing Berman but did admit to discovering her body and declining to report it because he reasoned nobody would believe he found her body and did not kill her.

Deputy District Attorney Habib Balian reminded the jury that Durst also testified he would lie under oath rather than admit to murder. He said the jury should disregard all of Durst’s testimony and denials that he killed his wife or Berman, likening it to a bowl of soup with one cockroach in it.

The prosecutor then contended Durst’s testimony was more like an entire bowl of cockroaches, again accompanied by a visual aid.

“This is what he served you,” Balian said. “Literally, you were served a bowl of cockroaches.”

Defense lawyers had objected to the photos but were overruled by Superior Court Judge Mark Windham.

Durst is only charged with killing Berman but prosecutors allege he also murdered his wife and a Texas neighbor while hiding from the law in 2001.

Durst admitted killing his neighbor and dismembering the body but was acquitted upon arguing self-defense. Durst was never prosecuted for his wife’s disappearance.

Durst famously appeared to confess while shooting the HBO documentary series, when he was caught on microphone saying to himself, “What the hell did I do? Killed them all, of course.”