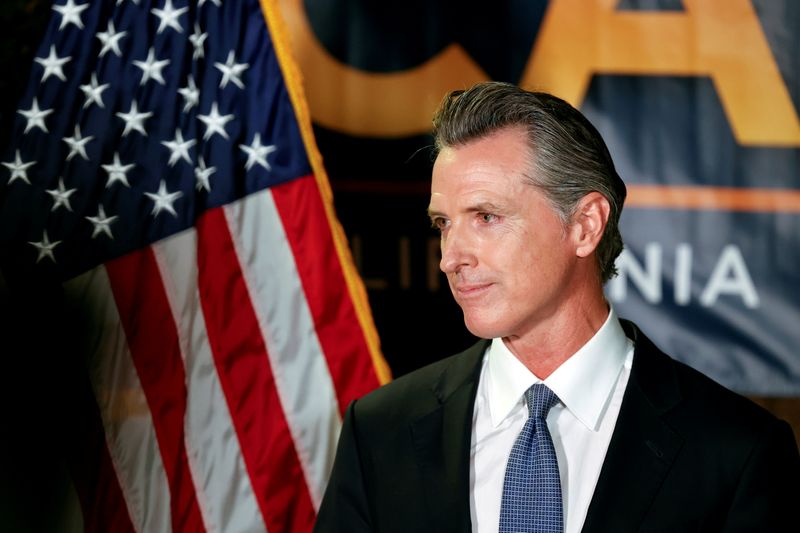 
By James Oliphant and Sharon Bernstein

WASHINGTON (Reuters) – Democrats are breathing easier on Wednesday after California Governor Gavin Newsom handily survived a Republican attempt to oust him through a recall election.

With midterm elections looming next year that will determine which party controls the U.S. Congress, here are four takeaways from Newsom’s victory — for both parties.

Newsom’s aggressive approach toward containing the coronavirus pandemic was the driver behind the recall movement. It also seems to be a primary reason he survived.

About one-third of voters said the pandemic was their top concern, according to an exit poll conducted for CNN – far more than any other issue.

As the Delta variant sweeps across the country, Newsom was able to draw a sharp contrast between states such as California, which have adopted sweeping virus mitigation measures, and Republican-run states such as Florida and Texas that have resisted them. The Republican favorite in the recall election, radio talk show host Larry Elder, said he would lift the state’s vaccine and mask mandates if elected.

“If the next few months going into the midterms get fought on vaccine mandates and masks and keeping kids safe, that’s good for Democrats,” said Robert Shrum, a longtime Democratic adviser who teaches at the University of Southern California.

TEXAS, FLORIDA AS A FOIL

Newsom nationalized the election, turning it into a test of Democratic versus Republican polices. He spent much of the closing days of his campaign railing against the actions of Republican-led states such as Texas, which recently enacted laws restricting abortion, curtailing voting access and expanding gun rights – and whose governor, Greg Abbott, opposes mask and vaccine mandates.

In both New Jersey and Virginia, the only two states with gubernatorial elections this year, both Democratic candidates are proposing much stronger requirements to manage COVID-19 and casting their opponents as out of step with the American public.

California’s outcome, however, might not be entirely applicable to other states. Newsom went into the recall with a huge advantage: Democrats outnumber Republicans in the state 2-to-1. Moreover, the recall process was conducted largely by mail and did not follow the contours of a normal election.

Newsom also benefited from the rise of Elder as his primary foil in the election. With his history of taking controversial conservative opinions on his radio show and his steadfast support of Republican former President Donald Trump, Elder made an easy target.

As the recall election approached, Newsom and his allies began to frequently invoke Trump, who lost to Democratic President Joe Biden in California last year by nearly 30 percentage points.

“I got to run against the real Donald Trump,” Biden said on Monday at a campaign event for Newsom. “Well, this year, the leading Republican running for governor is the closest thing to a Trump clone that I’ve ever seen.”

Raphael Sonenshein, a political scientist at California State University in Los Angeles, said Newsom successfully framed the election to be about national Republicans and Trump, rather than his own record.

“If you run against yourself, you’re going to lose,” he said.

For Republicans, the election illustrated the dangers of having polarizing, pro-Trump contenders in competitive states and districts where moderates, independents and suburban voters will be decisive. That may be a lesson that carries over to Republican nominating elections next year, when a host of Trump allies and candidates endorsed by him will challenge more centrist politicians.

TURNING OUT THE BASE

The largest concern among Democrats heading into the recall was that energized Republicans would vote in droves while their own voters would neglect to show up in an off-year special election. But Newsom and his allies appear to have successfully alarmed Democrats enough to come out.

That should serve as an example for Democrats at the national level, who at times have focused more on reaching swing voters than turning out their base in state elections, Sonenshein said.

With high turnout in the 2018 midterm elections and now in the recall, Democrats are showing that they are motivated not just by their own party identification, but specifically by opposition to today’s Republican Party, added Mike Madrid, a Republican political strategist who is a co-founder of the Lincoln Project, an anti-Trump group.

“Trump in some specter is enough to get them out to vote,” Madrid said.