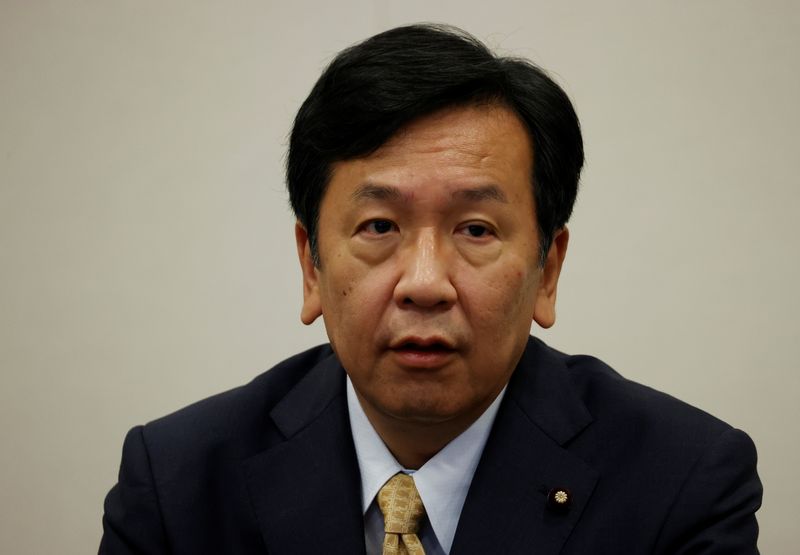 
TOKYO (Reuters) – Japan’s largest opposition, the Constitutional Democratic Party of Japan (CDPJ), said on Thursday it would try to close the country’s income gap with wealth redistribution if it were to take power in the Oct. 31 election.

It is a position echoed by Japanese Prime Minister Fumio Kishida, who is also head of the ruling Liberal Democratic Party (LDP), blurring policy difference between the LDP and CDPJ ahead of the lower house election.

“‘Wage hikes and distribution once growth is achieved.’ This is what (former prime minister Shinzo) Abe was saying. But there was no growth over the past eight, nine years and no wage hikes,” CDPJ chief Yukio Edano told reporters. “If we don’t distribute wealth first, no growth is achieved. This is a rather clear difference (between the two parties).”

Asked about the CDPJ’s chance of replacing the LDP as ruling party in the election, Edano said it would be as good as U.S. Major League baseball player Shohei Ohtani’s batting average.

“We watch him play on TV, waiting excitedly for him getting a hit or hitting a home run. I believe people can hold the same sort of anticipation,” he said.

The batting average of the Los Angeles Angels’ Ohtani, who has proved his ability to pitch and hit at an elite level this year, stands at .257.

A voter survey conducted by public broadcaster NHK showed on Monday that 6.1% of those polled supported the CDPJ, trailing far behind the LDP’s 41.2%.