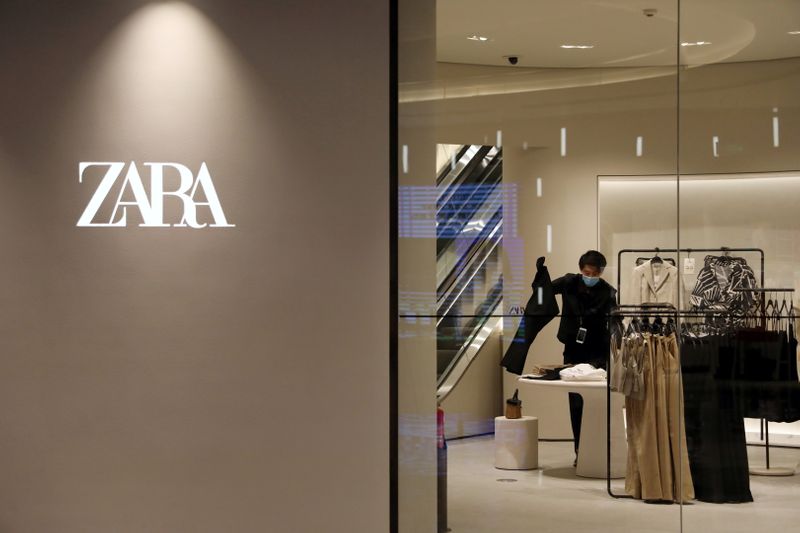 
By Corina Pons and Anna Ringstrom

STOCKHOLM/MADRID (Reuters) – When the world’s two biggest fashion groups unveil quarterly sales figures on Wednesday, No.1 Inditex (MC:) is seen back at pre-pandemic levels as stores reopen and people long to renew their wardrobe, while H&M still has some way to go.

Fashion retailers have been recovering from the blow in 2020 from the pandemic as economies reopen and restrictions ease, although the recent spread of the Delta variant of the coronavirus has caused the reintroduction of some restrictions.

Analysts said Zara-owner Inditex’ recovery in the quarter probably got an extra boost from remaining best-in-class at speed and from a strong overall recovery in its core market Spain, helped also by better sales in China, where H&M has taken a hit since it expressed concerns in 2019 about alleged human rights abuses in the Xinjiang region. “We expect Inditex to have shown the stronger sales performance over the summer, helped by its more premium positioning, fashion offer and better performance in China. However H&M’s margin and cashflow development should be strong,” RBC analyst Richard Chamberlain said.

Analysts on average see Spain-based Inditex’ sales at 7.02 billion euros ($8.27 billion) in the three months through July, its fiscal second quarter, according to Refinitiv SmartEstimates, up 48% from a year earlier and 2% higher than in the same period of 2019. “A solid quarter is anticipated,” analysts at JP Morgan, with an “overweight” rating on Inditex’ shares, said in a note.

“This should be supported by lower store closures and an overall slightly improved backdrop: the Spanish clothing market noticeably improved in June, although (it) looks to have taken a step down again in July; elsewhere in Europe data shows that France improved markedly; and (a) still strong U.S.,” they said. Inditex’ sales in May and early June were twice as high as a year earlier as shoppers splashed out on post-lockdown shopping sprees. Net profit at the Spanish group is seen at 872 million euros, up 307% and up 7%, respectively. Analysts at Alantra Equities said in a note that the lifting of travel restrictions, the unwinding of remote working and the return of social events should all boost demand for fashion apparel. Still, challenges remain. Sales at British low-cost fashion retailer Primark, which does not have an online presence, fell short of management expectations in its latest quarter, its figures showed on Monday.

Swedish H&M’s sales for the June-August period, its fiscal third quarter, are seen up 14% year-on-year but down 9% from 2019, according to Refinitiv SmartEstimates. Its sales statement on Wednesday comes ahead of a full-year earnings report on Sept. 30.

Industries around the world are being affected by a shortage of shipping containers and other global supply chain bottlenecks that have led to delays and soaring transport costs, but H&M and Inditex appear at little risk of empty shelves currently.

“Neither will be immune from it, but for the rest of this year currency (a weaker U.S. dollar) should more than offset the impact from rising raw material and shipping costs on margins, while both companies are strong at securing an adequate supply of inventory,” RBC’s Chamberlain said.

H&M’s sales were hit in China where in March it was wiped off Tmall and domestic phonemakers’ app stores after it in 2019 expressed concerns about alleged human rights abuses in the Xinjiang region.