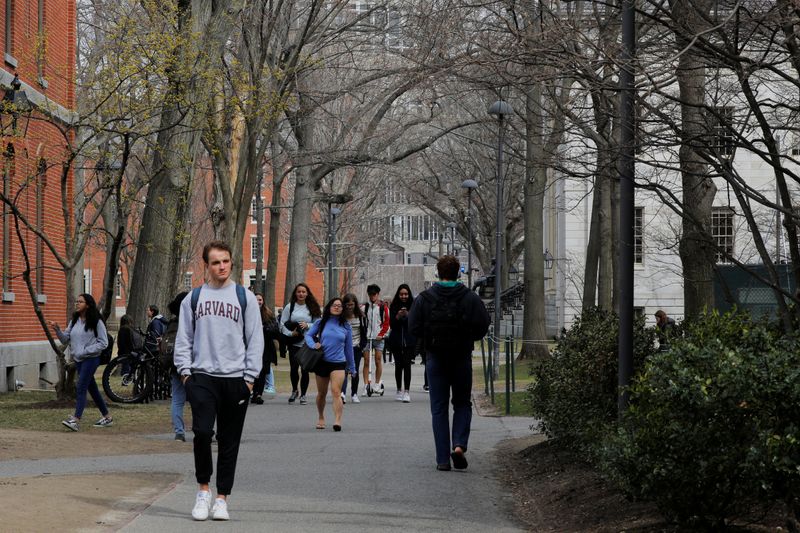 © Reuters. FILE PHOTO: Students and pedestrians walk through the Yard at Harvard University, after the school asked its students not to return to campus after Spring Break and said it would move to virtual instruction for graduate and undergraduate classes, in Cambr


BOSTON (Reuters) – Harvard University, already the wealthiest in the world, said on Thursday that its endowment made a 34% gain and swelled to $53.2 billion in the fiscal year that ended in June.

Investments in private and public markets helped fuel the increase which university officials called an “outstanding” year. A year ago, Harvard reported a 7.3% gain during the fiscal year that ended in June 2020, just months after markets tumbled amid the coronavirus outbreak.

But the returns trail those of other prominent endowments that invest in private equity, venture capital and hedge funds the way Harvard does.

N.P. Narvekar, the university’s chief investment officer and chief executive of Harvard Management Company (HMC), said Harvard’s gains would have been much higher had the school invested in riskier assets. He also cautioned that the endowment won’t produce these types of returns every year.

Over the last years, Harvard took less risk in its portfolio than many of its peers, Narvekar said in the university’s annual financial report. “Put another way, given the extraordinarily strong performance of the overall markets this past year, a meaningfully higher level of portfolio risk would have increased HMC’s returns dramatically,” he said.

The Massachusetts Institute of Technology’s endowment returned 56% in the year ended in June to $27.4 billion, while Brown University’s gained 52% to $6.9 billion, the schools said.

Few, if any, Republican House votes for infrastructure By Reuters