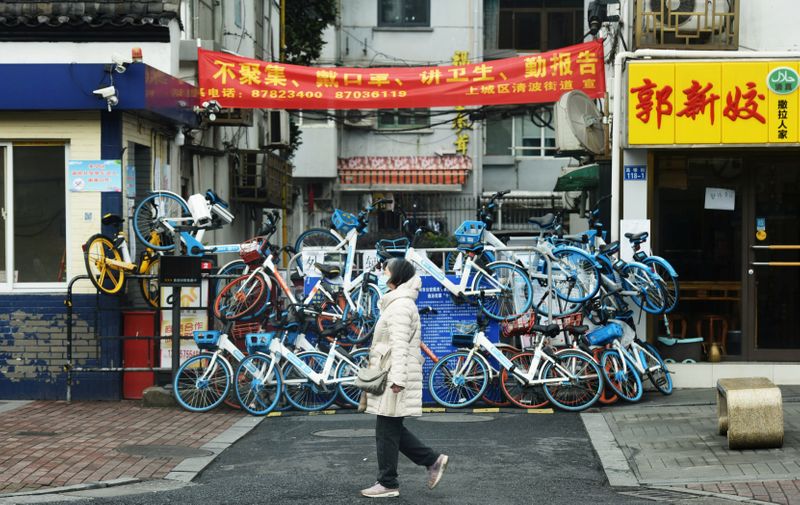 © Reuters. FILE PHOTO-A woman wearing a face mask walks past an entrance to a residential compound that has been blocked by shared bicycles, as the country is hit by an outbreak of the novel coronavirus, in Hangzhou, Zhejiang province, China February 12, 2020. China

All the cities in the top 10 are in eastern and southern China, except for the capital Beijing, which ranked sixth, after Hangzhou, Shenzhen, Guangzhou, Shanghai and Zhuhai. Suzhou, Hefei, Nanjing and Ningbo rounded out the list.

Cities in the provinces of Guangdong, Jiangsu and Zhejiang are best placed to benefit from China’s expected transition to a more technology-driven growth model during 2021-2025, the EIU said, with the cities of Hangzhou, Nanjing and Suzhou expected to further attract huge inflows of skilled workers.

In the government’s plan for 2021-2025, China will increase its annual research and development spending by over 7% in the period, telegraphing its resolve to advancing in the tech sector and rely less on external expertise and know-how.

Some economists warn the high-tech boom in eastern and southern China, however, will aggravate a brain drain in the north, with Beijing being the exception, and deepen north-south economic imbalances.

The EIU also said smaller cities such as Zhuhai, close to Guangzhou and Shenzhen, and Jiaxing, sandwiched between Shanghai and Hangzhou, will perform well economically due to positive spill-over effects.

China plans to build 10,000 kilometres (6,214 miles) of intercity and urban railway lines in 2021-2025 in the Yangtze River Delta in the east, the Greater Bay Area in the south and the Beijing-Tianjin-Hebei region in the north.

It also aims to create over 50 million new urban jobs during the period.

Bitcoin and Ethereum gain, stocks teeter ahead of a big batch of labor and retail data

Protesters taken away outside China Evergrande headquarters By Reuters