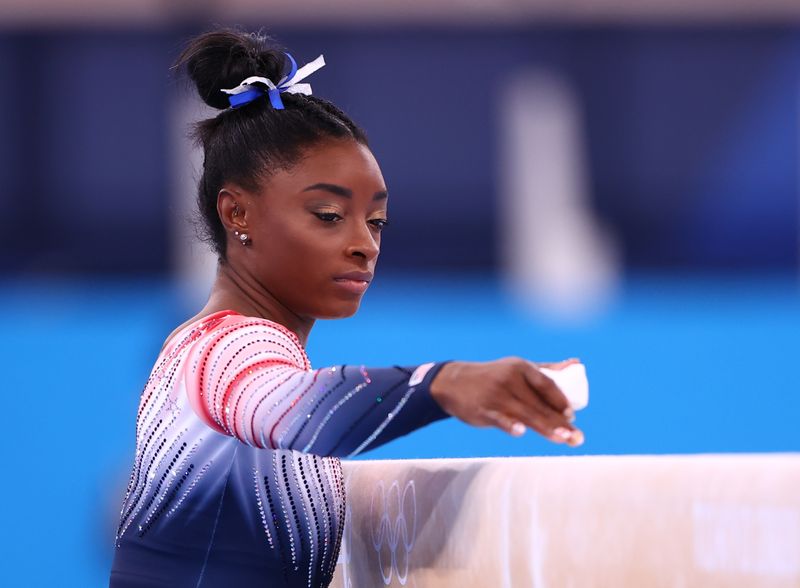 WASHINGTON (Reuters) – Olympic gymnasts Simone Biles and Aly Raisman will testify on Wednesday about the sexual abuse they suffered at the hands of disgraced USA Gymnastics doctor Larry Nassar, as the U.S. Senate examines why the FBI failed to investigate his crimes sooner.

Biles and Raisman will appear before the Senate Judiciary Committee alongside their fellow former Olympic teammate McKayla Maroney and former gymnast Maggie Nichols, who was the first victim to report the abuse to USA Gymnastics.

The hearing comes after the Justice Department’s Inspector General Michael Horowitz in July issued a scathing report https://oig.justice.gov/sites/default/files/reports/21-093.pdf which blasted the FBI for botching its investigation https://www.reuters.com/world/us/us-justice-watchdog-release-report-into-fbi-probe-ex-usa-gymnastics-doctor-2021-07-14 in a series of errors that allowed the abuse to continue for months.

Horowitz will also testify on Wednesday as will FBI Director Chris Wray, who is expected to face sharp bipartisan questioning about why the agents who botched the probe were never prosecuted for their misconduct.

The FBI’s investigation into Nassar started in July 2015, after USA Gymnastics President and CEO Stephen Penny reported the allegations to the FBI’s Indianapolis field office and provided agents with the names of three victims willing to be interviewed.

That office, then led by Special Agent in Charge W. Jay Abbott, did not formally open an investigation. The FBI only interviewed one witness months later, in September 2015, and failed to formally document that interview in an official report known as a “302” until February 2017 – well after the FBI had arrested Nassar on charges of possessing sexually explicit images of children in December 2016.

When the interview was finally documented in 2017 by an unnamed supervisory special agent, the report was filled with “materially false information and omitted material information,” Horowitz’s report determined.

The office also failed to share the allegations with state or local law enforcement agencies.

“Children suffered needlessly because multiple agents in multiple offices at the FBI neglected to share the Nassar allegations with their law enforcement counterparts at state and local agencies,” ranking Republican Charles Grassley said in prepared remarks.

“Disturbingly, the abuse occurred at the hands of someone who was entrusted with their medical treatment and well-being,” he added.

Horowitz also said that Abbott, who retired from the FBI in 2018, also violated the FBI’s conflict of interest policy by discussing a possible job with the U.S. Olympic Committee while he was involved with the Nassar investigation.

Neither Abbott nor the other unnamed supervisory special agent who botched the Nassar probe were prosecuted for their actions.

The FBI previously called Abbott’s behavior “appalling” and said the supervisory special agent remains with the FBI but is no longer a supervisor and is “not working on any more FBI matters.”

An attorney for Abbott previously said in a statement he is thankful to prosecutors for bringing Nassar to justice.

Nassar, who had been the main doctor for Olympic gymnasts, was sentenced in federal court in 2017 to 60 years in prison on charges of possessing child sex abuse material.

The following year, he was also sentenced up to 175 years and up to 125 years, respectively, in two separate Michigan courts for molesting female gymnasts under his care. Prosecutors have estimated he sexually assaulted hundreds of women.

How to Beat the Market the Rest of the Year? By StockNews