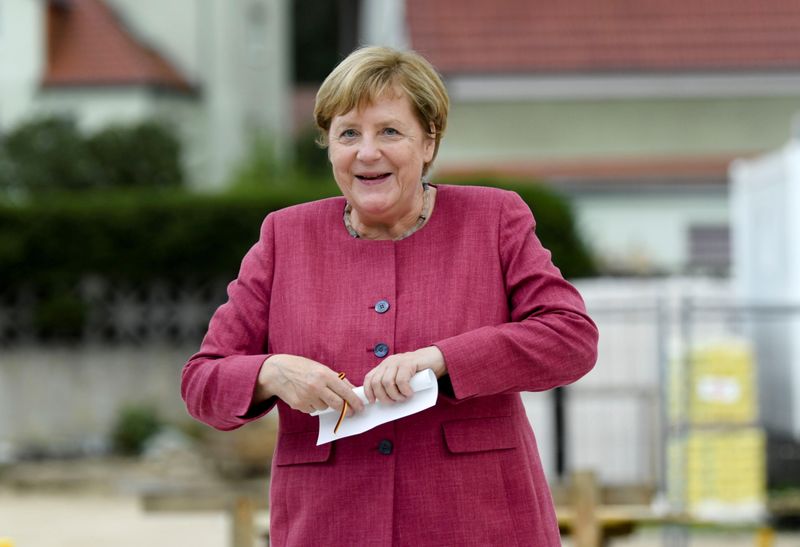 
WARSAW (Reuters) – German Chancellor Angela Merkel’s visit to Poland on Saturday, part of a goodbye tour of Europe for the continent’s longest serving leader, risks being overshadowed by tensions over a gas pipeline and questions over her legacy in central Europe.

Having grown up in East Germany near the Polish border, Merkel, 67, was seen by some observers as a chancellor who could relate to the post-communist states of central Europe.

However, on her farewell visit to the capital of emerging Europe’s largest economy, her determination to complete the Nord Stream 2 gas pipeline to Russia has soured relations.

The pipeline pits Germany, the EU’s biggest economy, against central and eastern European nations, some of them EU members, who say it will increase the bloc’s dependence on Russian gas.

Russia, the cornerstone of the Soviet Union that once dominated central and eastern Europe, is still viewed in much of the region with suspicion.

“Generally she was seen as someone who understood central and eastern Europe,” said Michal Baranowski, head of the German Marshall Fund’s Warsaw office, adding Polish-German relations were at a “tricky moment”.

“I think she’s leaving as Ms Nord Stream 2, from the Polish perspective.”

Relations have been tense under Poland’s ruling nationalists, the PiS.

Polish Deputy Foreign Minister Marcin Przydacz told Polish public radio on Friday he expected Nord Stream 2 would feature in Merkel’s talks with Prime Minister Mateusz Morawiecki, alongside the Polish COVID-19 National Recovery Plan, which has not been approved by Brussels due to concerns over Warsaw’s commitment to the rule of law.

Poland and Hungary are embroiled in a long-running row with Brussels over issues including judicial independence, press freedoms and LGBT rights, a conflict that recently intensified with Brussels taking legal action against Warsaw and Budapest.

“She (Merkel) is worried that the divergences about the judicial question will grow between Eastern Europe and the rest,” said a German government source.

Analysts say that under Merkel’s rule, Germany sought consensus and dialogue with central and eastern European states, pushing Brussels to the fore and avoiding direct conflict.

However, some diplomats say Merkel could have done more against democratic backsliding.

“Merkel doesn’t like revolution. She doesn’t like to rock the boat and she probably thought that she could contain it, and clearly that didn’t work,” said Sophie in’t Veld, a Dutch Liberal member of the European Parliament.

But with anti-German sentiment still strong among many PiS voters, some analysts say Merkel may also have been wary of stirring up old animosities in a country that suffered greatly during World War Two.

PiS politicians have repeatedly called for war reparations from Germany.

With Armin Laschet, the conservatives’ candidate to succeed Merkel, struggling in polls, policymakers across Europe are starting to contemplate what a government led by Finance Minister Olaf Scholz’s Social Democrats would mean.

“It is very important that the next German government backs a more decided EU response to stop further backsliding in Poland, Hungary and other countries,” said Daniela Schwarzer, executive director for Europe and Eurasia at the Open Society Foundation.