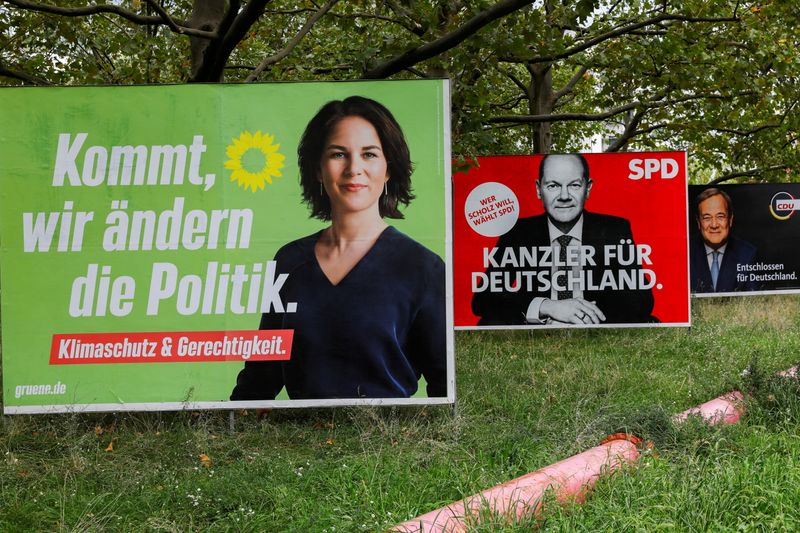 BERLIN (Reuters) – Germany’s Social Democrats (SPD) have opened up a bigger lead over Armin Laschet’s conservative bloc, a poll showed on Sunday ahead of a primetime television debate between the three main candidates to succeed Angela Merkel as Chancellor.

Two weeks before a national election which has proved to be unexpectedly turbulent, the INSA poll for Bild am Sonntag put the SPD on 26%, up a point from a week ago and their highest rating since June 2017.

Laschet’s conservative bloc was unchanged at 20% and the Greens were down 1 point at 15%.

The conservatives are already missing the pulling power of Merkel, who after four election victories and 16 years leading Europe’s biggest economy is not running again.

In the last three months, the conservatives have lost 8-9 percentage points in most polls. This week’s edition of the influential Spiegel magazine has a front cover picture of Laschet holding his hands in front of his mouth with the headline “Oooops”.

The jovial if uncharismatic leader of Germany’s most populous state has made mistakes during the campaign, including being caught on camera laughing during a visit to a town hit by lethal floods in July. He apologised.

Desperate to avert election defeat, Bavaria’s CSU – sister party to Laschet’s CDU – rallied behind him on Saturday and tried to bury underlying tensions.

The TV debate starting at 8.15 pm local time (1815 GMT) will offer Laschet an opportunity to appeal directly to voters.

The SPD’s Olaf Scholz won the first televised debate two weeks ago, according to polls, and is still by far the most popular of the candidates for chancellor.

His ratings have not so far been hit by last week’s raids on the finance and justice ministries as part of a probe into the government’s anti money-laundering agency, which as finance minister, Scholz oversees. The INSA poll was conducted partly before and partly after the raids.

Most experts think a three-way coalition is the most likely outcome of the election – a scenario that could take several months to negotiate during which time Merkel remains chancellor.

BOJ more downbeat on exports, output even as recovery seen on...