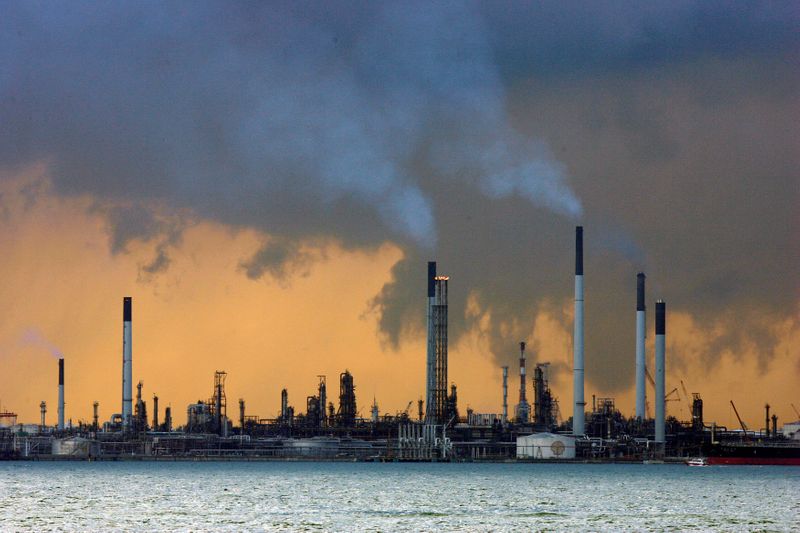 © Reuters. FILE PHOTO: A view of an oil refinery off the coast of Singapore March 14, 2008. REUTERS/Vivek Prakash/File Photo


By Mohi Narayan and Koustav Samanta

SINGAPORE (Reuters) – Asian oil refiners’ margins have rallied back to their highest since before the COVID-19 pandemic struck, spurred by a doubling of gasoil profits as the global economic recovery and power shortage drive demand for the fuel, analysts and traders said.

Gasoil demand has surged as power generators seek alternatives to record-high and coal and as industrial consumption has climbed while economies reopen from COVID-19 restrictions. That has pushed the gasoil profit margin nearly 60% higher in the past month, replacing gasoline as the key component of overall refinery profits.

The Singapore complex refining margin, a proxy for Asian refiners’ profitability, jumped to more than $7 a barrel earlier this month, the highest since September 2019.

The rebound will incentivise Asian refiners to boost output in the coming months although regional supplies of refined oil products are expected to stay capped by declining Chinese exports and low inventories.

The release of pent-up demand could see regional gasoline consumption rising by some 100,000 barrels per day (bpd) over November and December, while gasoil demand is expected to rise by some 200,000 bpd between now and December, underpinned by the resumption of more economic activities, said Dylan Sim, an analyst at consultancy FGE.

“Low exports from China will continue to support Asia’s gasoil complex through to the end of 2021,” he said.

Also, middle distillate inventories across key storage hubs in Asia are at their lowest for this time of the year since 2013 and are now 9.1 million barrels lower than the 2017-2019 average, Sim said, after refiners cut output because of the recent lower profits.

Global power shortages caused by natural gas and coal price spikes will also drive consumers to switch to diesel for power. Consultancy Rystad Energy expects the switch in fuels to boost Asia’s oil demand by 400,000 bpd on average over the next six months.

Refining profit margins for benchmark gasoil with 10 parts per million of sulphur in Singapore are at their highest since December 2019, while the margin for 92-octane gasoline has climbed about 50% in October, Refinitiv data showed.

“We see (gasoil) cracks increasing towards the end of the year, with demand expected to strengthen further over the agricultural season,” said Wood Mackenzie analyst Daphne Ho, adding that stronger demand for jet fuel and kerosene in the fourth quarter would prevent these fuels from being blended into the gasoil pool.

Also, Asian refiners would need at least a month or two to raise output as some plants are still shut for maintenance in October, a Singapore-based gasoil trader said.

“We can have slightly better (gasoil) supply from November, but still (that would be used) to cope with the potential increase in demand regionally,” the trader said.