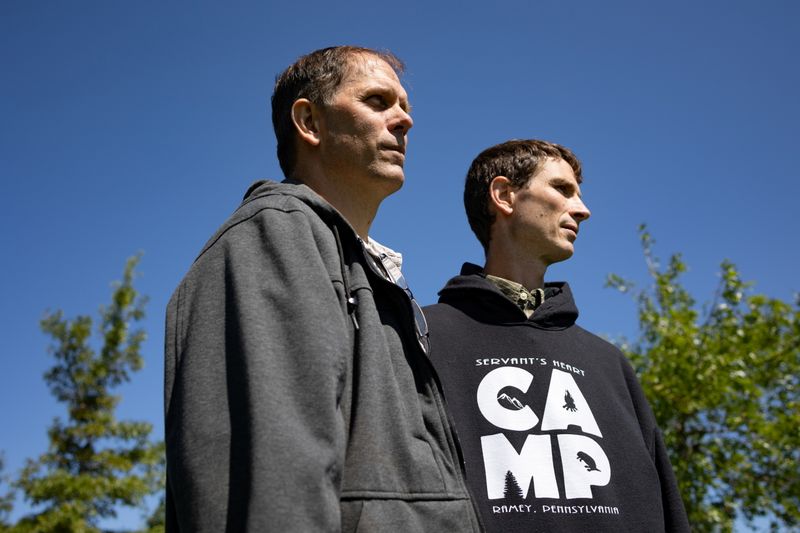 © Reuters. (L-R) Arborists Mark Trautman and Ben Haupt, who worked to recover the debris from the hijacked United Airlines Flight 93 near Shanksville, pose for a portrait in Stoystown, Pennsylvania, U.S., September 2, 2021. REUTERS/Hannah Beier

Before the al Qaeda attacks on Sept. 11, 2001, the local arborists climbed trees only to take down branches. When the hijacked airliner slammed into soil in a fiery explosion, turning the woods near Shanksville into a gruesome crime scene suspended above the ground, the two men would be called in for a task that transformed their lives.

For nearly a week, they clambered through the blackened canopy garlanded with wreckage and gore. They plucked down vital evidence for the prosecution of al Qaeda plotters and found remains for grieving families with no bodies to bury.

They were among the most extraordinary yet overlooked early responders to the attacks, in which nearly 3,000 people were killed, including all 33 passengers, seven crew members and four hijackers aboard Flight 93.

“It was the most important thing I ever did in my life,” Trautman said in a recent interview.

The two arborists emerged from the hemlocks as changed men, one left unmoored, the other with a renewed purpose.

A state trooper, Greg Sullenberger, was among the first responders to venture into the smoldering woods after the crash.

Sharp (OTC:) metal plane shards as big as kitchen tables had sliced into bark. Sullenberger said he heard a cracking sound above. As he stepped to the right, a branch plummeted to his left.

Worried about investigators’ safety, he thought of Trautman, whom he had known since they were Boy Scouts. His childhood friend worked at Penn State University, tending to the grand elms shading its campus. An FBI agent told Sullenberger to call Trautman in for help.

Leaving his wife and two young daughters at home, Trautman and Haupt, his campus colleague, loaded up their harnesses and chainsaws and drove down. The FBI issued them yellow ID cards that said: “Disaster Site, September 11, 2001 — FBI/Penn State.”

The arborists roped from treetop to treetop, recovering wallets, a hijacker’s ID and body parts to be identified at a temporary morgue.

John Larsen, the FBI special agent in charge of scouring the woods, said the Shanksville scene was distinguished from the pulverized crash sites in Manhattan and at the Pentagon by the sheer quantity of intact evidence yielded. He calls the arborists unsung heroes.

“None of us could do what those guys were doing, and without them we’d have been dead in the water,” Larsen said.

Haupt, who was then 24, remembers turning to Larsen in the woods, overwhelmed after finding what looked to be baby shoes from someone’s luggage.

“I look at this place, and I said, ‘I know this isn’t hell,'” Haupt recalled. “‘But if this isn’t, then how bad is hell?’ And I just broke down. Mr. Larsen just broke down also and cried right with me out there, because it was hard.”

Deep into the hemlocks, the agent and the arborist hugged, consoling each other.

Haupt became a Christian evangelist soon after and evokes the Shanksville woods in his sermons as a vision of hell.

“I saw all the wickedness of man,” he said.

He now lives in a house surrounded by towering lindens, walnut trees and white oaks with his wife, Jennifer, whom he met in Bible college, and their five children, who hunt deer and climb trees with their father. Preaching has taken him as far as the Caribbean and the Philippines, but he can see the house he grew up in from his porch, where his parents still live.

He continues to work as an arborist, and sometimes refers clients to Trautman, who he says knows more about trees than anyone else in Pennsylvania.

Trautman, 54, grew up in a house surrounded by corn and dairy farms outside Herminie, a small town about 45 miles (72 km) west of where Flight 93 would crash after passengers and crew fought back against the hijackers.

His mother roused him from bed each morning with the same refrain: “Rise and shine, your country needs you!”

Years later, while mired in the horrors of the hemlock canopy, he could hear his mother’s words looping in his head.

Like her son, Margaret Trautman remains proud of his work at the crash site. But as the years passed after Sept. 11, it became harder to ignore its toll.

“It’s affected him,” she said. “He has trouble with relationships.”

Mark Trautman enrolled in the federal World Trade Center Health Program and was diagnosed with post-traumatic stress disorder (PTSD). He is finalizing his third divorce, takes a daily antidepressant and sees a counselor twice a month.

He wears a baseball cap that shades his blue eyes, bashful about his thinning crown, and lives alone by a mountain ridge near Spruce Creek in a house made of hemlock timber. The hulking machines he uses for work fill part of his lawn.

Earlier this month, Trautman and Haupt reunited to visit the Flight 93 National Memorial. The two friends had not met in more than a decade.

As they wound their way down to the hemlocks, Haupt described to his teenage daughters how different everything looked. Trautman quizzed Haupt’s knowledge of the Latin names of trees along the way.

Both men recalled a majestic beech tree in the heart of the grove, an unforgettable glimpse of life’s beauty in the infernal woods. Trautman hopes to see the beech again, but the grove is off-limits, held as sacred ground for victims’ families.

“It smelled so bad,” Haupt said, looking out to the rock near the tree line, marking the impact site.

“Well, it was bad,” Trautman replied.

The smell stuck to his boots so much that he later burned them.

The men had reached as close as they could get to the grove that changed them. It was a little greener now, but just as silent as before.