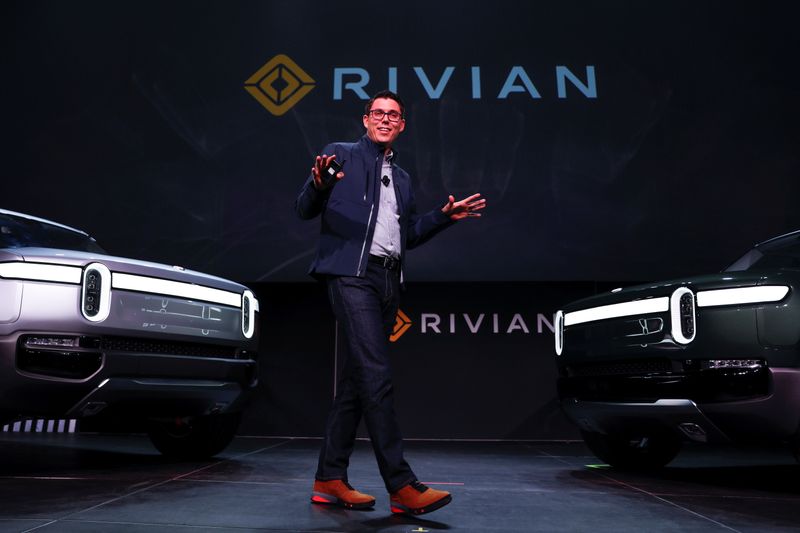 DETROIT (Reuters) -Ford Motor Co, which has repeatedly touted its strategic relationship with electric vehicle maker Rivian, no longer has a representative on the startup’s board of directors ahead of its going public.

While an announcement was never made, Ford executive Alexandra Ford English left the Rivian board in May according to documents Rivian made public on Oct. 1 ahead of its planned initial public offering. Ford vice president Doug Power replaced English in June, and left the board in September.

“Rivian is a strategic investment and we’re still exploring ways for potential collaboration with them. We don’t have anything to announce today,” Ford spokesman Ian Thibodeau said on Wednesday.

Ford, which holds a stake greater than 5% in Rivian according to a filing with the U.S. Securities and Exchange Commission, had a seat on the Rivian board when it was a private company, but that would not continue as Rivian went public, Thibodeau said.

English, daughter of Ford Executive Chairman Bill Ford, joined Rivian’s board in May 2020, replacing Joe Hinrichs after he left Ford. At the time English was added, Rivian Chief Executive R.J. Scaringe cited her passion for mobility and electrification, as well as her connection to the company’s long family role in transportation.

Rivian declined to comment on Wednesday beyond documents it filed with U.S. regulators, citing the quiet period ahead of its IPO. In the SEC filing Rivian said, “Following this offering, none of our stockholders will have any contractual rights to elect or designate members of our board of directors.”

When Ford said in March that English would join Ford’s board, its press release identified her as the No. 2 U.S. automaker’s representative on Rivian’s board. She was officially elected to Ford’s board in May.

Ford executives have repeatedly stressed that the company’s relationship with Rivian is strategic, but Ford’s Lincoln division in April 2020 canceled plans to build EVs with Rivian, a move to save money during the pandemic.

Ford has invested more than $820 million in Rivian over two fundraising rounds, according to the SEC filing. The filing did not include information on the latest $2.5 billion funding round Rivian announced in July that also included Ford.

Amazon.com (NASDAQ:) and Cox Automotive, which also have Rivian stakes greater than 5%, still have board representatives.

In a February conference call with analysts, Ford CEO Jim Farley said, “We love what R.J. is doing at Rivian. It’s a strategic investment. It’s not a transactional investment. We’ll keep you updated, but that’s a very fundamental bet.”