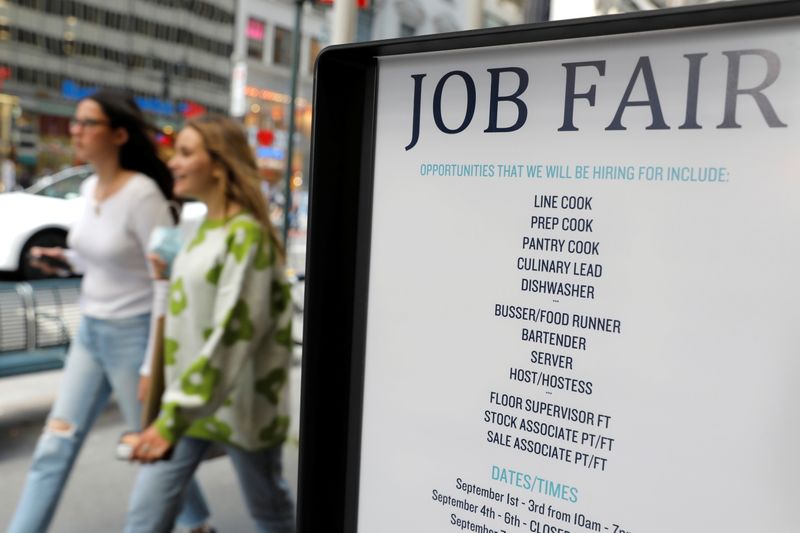 © Reuters. Signage for a job fair is seen on 5th Avenue after the release of the jobs report in Manhattan, New York City, U.S., September 3, 2021. REUTERS/Andrew Kelly

WASHINGTON (Reuters) – U.S. Federal Reserve bank Gov. Michelle Bowman added her voice Wednesday to the growing number of policymakers who say the weak August jobs report will not throw off the central bank’s developing plan to trim its $120 billion in monthly bond purchases later this year.

“Even though some of the recent data may have been less strong than we expected we are still looking at very robust economic growth,” Bowman said at an online event organized by the American Bankers Association. “We are very close to our goal on maximum employment…If the data comes in as I expect that it will, it will likely be appropriate for us to begin the process of scaling back our asset purchases this year.”

Bowman becomes the fifth Fed official in the past two days to signal that the disappointing August jobs report on its own would not stop the Fed from beginning to pare its bond purchases later this year [L1N2QA2FX].

Some, including Atlanta Fed president Raphael Bostic, suggested the addition of just 235,000 jobs in August, compared to nearly a million per month in June and July, might delay a final decision.

But the momentum remained in favor of starting the bond taper, a process some Fed officials are eager to begin as a first step in exiting from pandemic-era emergency programs.

It’s a turn other central banks have already begun, including the European Central Bank, and the process would be more complicated globally the longer the Fed waits and the less clear its plans.

Fed officials have tied any change in policy to economic variables, particularly job growth, that could be weighed down by the current surge of coronavirus cases – a risk highlighted by the August employment report.

Bowman said one month of disappointing data should not be given too much weight.

“It is important not to take too much signal from a single data point as we might have seen last week from the labor market,” Bowman said.

Chase Arrives in the U.K. to Offer Consumers a Simple, Rewarding Banking Experience