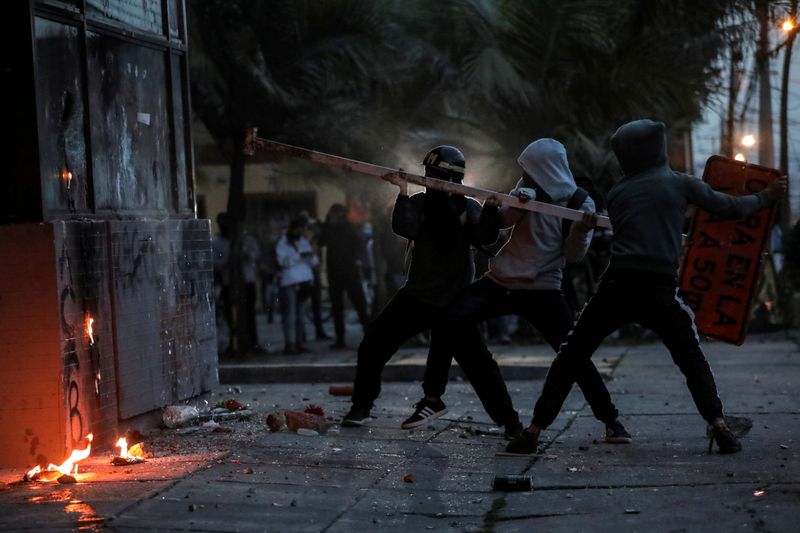 © Reuters. FILE PHOTO: People vandalize the exterior of a police station during a protest after a man, who was detained for violating social distancing rules, died from being repeatedly shocked with a stun gun by officers, according to authorities, in Bogota, Colomb

(This Sept. 10 story corrects location of morgue in lede)

SOACHA, Colombia (Reuters) – It has been a year since Carolina Hurtado rushed to a hospital morgue near Colombia’s capital to identify the bloodied body of her older brother Cristhian, but she still has no definitive answers about how he was killed.

Cristhian Hurtado, 27, was one of at least 13 people rights groups and families have said were slain by police in Bogota and its satellite city Soacha amid protests that exploded in September last year after two officers assaulted and killed taxi driver Javier Ordonez.

Since 2019 a series of demonstrations against President Ivan Duque’s unpopular government have led to more than 40 civilian deaths, according to government figures. Victims’ families, their lawyers and human rights groups say many of the deaths are driven by heavy-handed policing.

Though the army has a long record of rights abuses and unlawful killings during Colombia’s six decades of civil conflict, urban police forces were until recently widely thought of as better-trained and more professional.

Despite international outcry https://www.reuters.com/world/americas/colombia-probe-police-who-stood-by-civilians-shot-protesters-2021-05-31, including from the United Nations and European Union, and assurances from Duque those responsible would be brought to justice, only one police officer has so far been detained, under house arrest, for the killings during protests a year ago.

That officer and three others are being investigated over accusations of homicide, the attorney general’s office told Reuters – one of them for two separate killings. Reuters was unable to identify the lawyers representing the police officers.

Officers under investigation have been placed on administrative duties, the national director of police, General Jorge Vargas, said in a Thursday Twitter (NYSE:) post, adding that he hoped authorities would detain further officers where necessary.

The police had promptly handed over information about munitions used during the protests to the attorney general’s office last year, Vargas said, asking forgiveness from those who had been the victim of proven misconduct by police.

Investigations into the death of six other protesters, including Cristhian, are still in an initial stage of inquiries, the attorney general’s office said. It did not respond to questions about whether there were investigations over the deaths of two remaining civilian victims identified by advocacy groups.

Like some other families of those killed that night, Carolina and her mother, Maria Elena, insist Cristhian was not even involved in protests. His girlfriend told them he went out to buy breakfast ingredients for the next morning.

“It hasn’t been verified who is responsible and it’s very probable that person is still in the police and is still wearing the uniform,” said Carolina. Her family and their lawyers say Cristhian was killed by a gunshot wound to the head.

A police spokesman said that officers convicted of abuses would be punished to the full extent of the law, but it was for prosecutors to prove their guilt.

The lack of progress in investigations bodes badly for families seeking answers over more numerous deaths at protests that erupted in April this year over unpopular tax reforms, lawyers for the families and rights groups say.

The government says at least 29 people were killed during the two months of protests: those figures include three police officers and several protesters killed by civilians, according to officials. Colombian rights group Temblores has said police are responsible for as many as 44 killings.

To date, 16 officers are being investigated for homicide related to this year’s protests, the national police said. Officers under investigation are usually placed on administrative duties.

Police accused of misconduct face both internal investigation in disciplinary proceedings within the force and, in more serious cases, criminal investigation by the attorney general’s office or the military criminal justice unit (JPM).

Police fall under the remit of the Defense Ministry, meaning cases of killings by police which take place in the line of duty – including those at protests – are often handled by the military justice system in the shape of the JPM, rather than the civilian one.

That, human rights advocates and lawyers say, contributes to impunity.

Since 2017, only 23 cases of police killings handled by the JPM have ended in convictions, while 355 have been shelved, the unit told Reuters.

Moreover, it has a lengthy backlog. As of end-June, the JPM had 860 open investigations into homicides committed by officers, it said.

The attorney general’s office told Reuters it has opened 172 inquiries connected to killings by officers since 2017, which led to 52 investigations and eight convictions. Only three cases were shelved.

Victims’ families, rights advocates and lawyers told Reuters they believed proceedings in the military tribunal were more favorable to officers.

“The military justice system lacks independence and has a long record of covering, rather than investigating, abuses in Colombia,” said Jose Miguel Vivanco, Americas director at Human Rights Watch.

JPM executive director Fabio Espitia declined to comment on whether the JPM is more lenient than regular prosecutors. The JPM’s press office did not respond to questions.

A spokesman for the national police said disciplinary investigators are well-qualified but the department is congested due to the large number of cases.

He said Vargas has pushed for better human rights standards this year and delicate cases would be handled by the police’s top internal investigator.

The police will ask the advice of the U.N. to help strengthen its human rights policies and work toward open communication with communities, the new police director of human rights, Luis Alfonso Novoa, said in a statement on Wednesday after taking up his post.

Anger in Colombia over police violence has mounted steadily since Bogota teenager Dilan Cruz was killed by a projectile fired by officers during a protest against rumored pension and minimum wage reforms in November 2019.

In September 2020, a viral video of taxi driver Ordonez writhing on the ground while being repeatedly tasered by police as he screamed for them to stop set off renewed demonstrations. The police said he had violated coronavirus distancing rules.

The heavy death toll in this year’s protests – which led to the withdrawal of the unpopular tax and health reforms and the resignation of the finance minister – prompted the government to pledge https://www.reuters.com/world/americas/colombia-president-announces-policing-changes-amid-brutality-accusations-2021-06-06 better human rights training for police and increase oversight of officers.

The president has also blamed police violence on a few bad apples and said cases were being dealt with promptly. He cited the example of officer Juan Lloreda, sentenced to 20 years in prison in April for his part in Ordonez’s torture and killing.

The investigation into another officer’s involvement in Ordonez’s killing continues.

In at least one case of a 2021 protester death, the victim’s family is sure bullet and video evidence has helped the investigation advance more quickly.

A police officer was swiftly charged by the attorney general’s office in the shooting of 19-year-old Santiago Murillo, who was caught up in a demonstration while walking home from his girlfriend’s house in the central city of Ibague. Video of his shooting was widely shared on social media.

“My world fell apart,” his mother Milena Meneses said. “He was my only child.”

With the focus on a taper, five questions for the Fed By Reuters

S&P 500 Rebound Fades on Global Growth Concerns Ahead of Fed Meeting By Investing.com