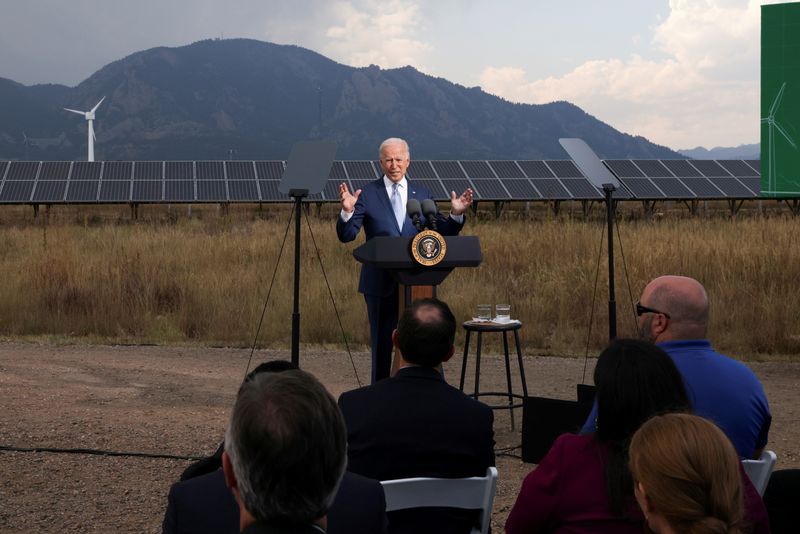 By Jarrett Renshaw and David Lawder

(Reuters) – Democrats are crafting a massive spending package as big as $3.5 trillion that would transform the U.S. economy by investing in free community college, childcare and green energy, funded by tax hikes on the wealthy and larger companies.

The bill’s authors must balance the Biden White House’s campaign pledges and the party’s progressives and moderates, all while catering to lawmakers empowered by Democrats’ razor-thin majorities in Congress to demand pet concessions.

Facing unified Republican opposition, Democrats will need to pass the bill on strict party lines using a legislative tool called budget reconciliation. They cannot afford to lose even one vote in the Senate and more than three votes in the House of Representatives.

Here are the key flashpoints:

HOW BIG IS IT, ANYWAY? The Biden administration is pushing $3.5 trillion in spending over 10 years, but some moderate Democrats, including Representative Stephanie Murphy of Florida, are balking https://twitter.com/RepStephMurphy/status/1436010335073357825?s=20 at its price tag and how it would be financed.

U.S. Senator Joe Manchin, a West Virginia Democrat, and Kyrsten Sinema of Arizona, have flatly refused to support a $3.5 trillion package, siding with Republicans who universally say it is too big https://www.reuters.com/article/us-usa-biden-infrastructure/u-s-senator-manchin-casts-doubt-on-democrats-deadline-for-budget-bill-idUKKBN2G80AM?edition-redirect=uk.

Manchin won’t say what size spending package he can accept, making him one of the biggest kingmakers in the negotiations. He and Sinema will discuss the package with President Joe Biden on Wednesday.

HOW MUCH WILL RICH, COMPANIES PAY?

The House Ways and Means Committee on Wednesday was poised to advance a tax plan https://www.reuters.com/world/us/us-house-democrats-seek-corporate-tax-increase-265-percent-2021-09-13 on Wednesday that would raise the top tax rates to 39.6% for individuals and 26.5% for corporations and hike capital gains taxes, rolling back part of Republicans’ 2017 tax cuts.

The bipartisan Joint Committee on Taxation (JCT) estimates https://www.jct.gov/publications/2021/jcx-42-21 that the tax changes would raise $2.07 trillion in direct revenues over 10 years, potentially leaving a more than $1 trillion funding gap unless the bill’s investments are cut.

The House plan may turn off some progressives calling for more tax fairness because it backed off of Biden’s proposals to raise the corporate tax rate by a third to 28% and to tax more of the transfer of wealth via rich-family inheritances. It also keeps alive a tax break favored by private equity managers.

Moderate Senate Democrats will also have their say in the tax proposals. Manchin has called for an even lower corporate rate of 25%.

As Democrats consider shrinking the bill, Biden’s historic investments to fight climate change could be at risk, including tax breaks for electric vehicles, solar and wind power and other measures aimed at meeting Biden’s goal of net-zero carbon emissions by 2050.

These are estimated to cost $235 billion over 10 years — including $7.4 billion in credits for electric bicycles and $27 billion for electric vehicles — making them juicy targets for shrinking the package. In committee debate, Republicans hammered these credits as giveaways to wealthy Tesla (NASDAQ:) car buyers and corporations like Amazon.com (NASDAQ:).

Eliminating some green energy provisions may erode support from progressives who had promised transformative investments to fight climate change.

Progressive (NYSE:) votes https://progressives.house.gov/press-releases?ID=509D8F61-A0DF-449B-ADFF-FF1455B01B14 also could be at risk if social spending proposals at the heart of Biden’s plans to bolster the middle class and reshape the economy are cut, including universal preschool and paid family leave.

Democrats’ plans to extend a larger Child Tax Credit https://www.reuters.com/world/us/bidens-child-tax-credit-pays-big-republican-states-popular-with-voters-2021-09-15 through 2025, providing families monthly payments of up to $300 per child, would cost a hefty $556 billion, according to JCT. Tax credits for child care workers and expenses would cost $35 billion and an expanded Earned Income Tax Credit for low-income workers would cost $135 billion over a decade.

But these, too, could be pared back if Manchin and other moderate Democrats have their way.

Manchin has voiced concern https://transcripts.cnn.com/show/sotu/date/2021-09-12/segment/01 that the Child Tax Credit contains no work requirements for parents nor education requirements. A Reuters analysis https://www.reuters.com/world/us/bidens-child-tax-credit-pays-big-republican-states-popular-with-voters-2021-09-15 has found that the expanded credit has disproportionately benefited Republican states.

Restoration of the previously unlimited SALT deduction — which Representative Tom Suozzi of New York estimates would cost some $385 billion — was excluded from the House tax plan. But Suozzi and other Democrats, including House Ways and Means Chairman Richard Neal of Massachusetts, said https://waysandmeans.house.gov/media-center/press-releases/neal-pascrell-suozzi-path-forward-salt they are “working daily” to pass to include meaningful SALT relief in the bill.

Suozzi opposes https://suozzi.house.gov/media/press-releases/suozzi-no-salt-no-deal-will-still-oppose-any-changes-tax-code-unless-cap-salt a bill without this, saying: “No SALT, no deal.”