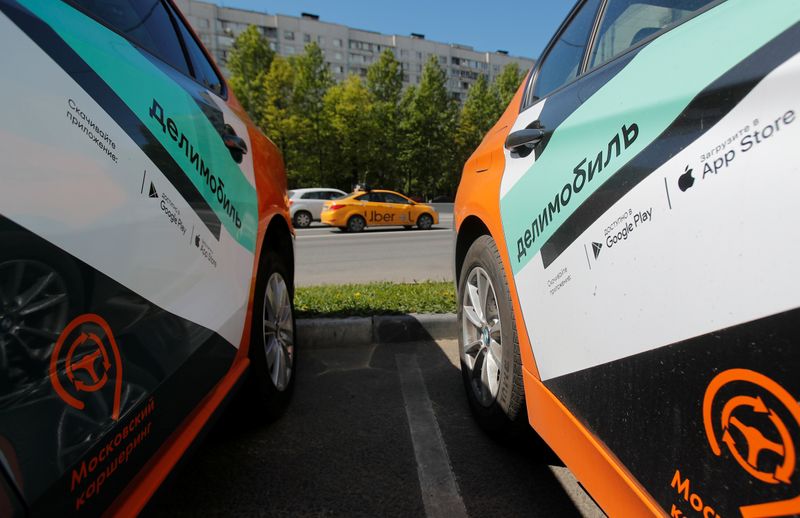 © Reuters. FILE PHOTO: A taxi car drives by Delimobil branded vehicles amid the outbreak of the coronavirus disease (COVID-19) in Moscow, Russia May 20, 2020. Picture taken May 20, 2020. REUTERS/Maxim Shemetov

MOSCOW (Reuters) – Russian car-sharing company Delimobil could raise around $350 million in an initial public offering in the United States this autumn and has picked banks to arrange the listing, financial market sources told Reuters on Tuesday.

Three sources said the company was targeting an offering this autumn, with two of them saying Delimobil was eyeing a $350 million listing on the New York Stock Exchange and a dual listing in Moscow. Delimobil has previously said it was looking at New York for the offering.

Delimobil, one of Russia’s biggest car-sharing providers along with Yandex (NASDAQ:).Drive and others, declined to comment.

Three sources said Bank of America (NYSE:) and Citi were among the banks picked to arrange the offering. Two sources said UBS, as well as Russia’s Sberbank CIB, VTB Capital and Renaissance Capital were the other banks selected.

Bank of America, Citi, VTB Capital and Renaissance Capital declined to comment. UBS and Sberbank CIB did not immediately respond to requests.

VTB in July said it had purchased a 13.4% stake in Delimobil. In June, Delimobil said VTB’s minority stake was worth $75 million.

Delimobil, which operates a total fleet of more than 16,000 vehicles in Russia, first announced IPO plans in 2019, saying it would float a 40% stake. The sources did not say whether the $350-million target for this autumn corresponded to 40% of the business.

In June, the company said it was planning to expand into markets in developing countries.