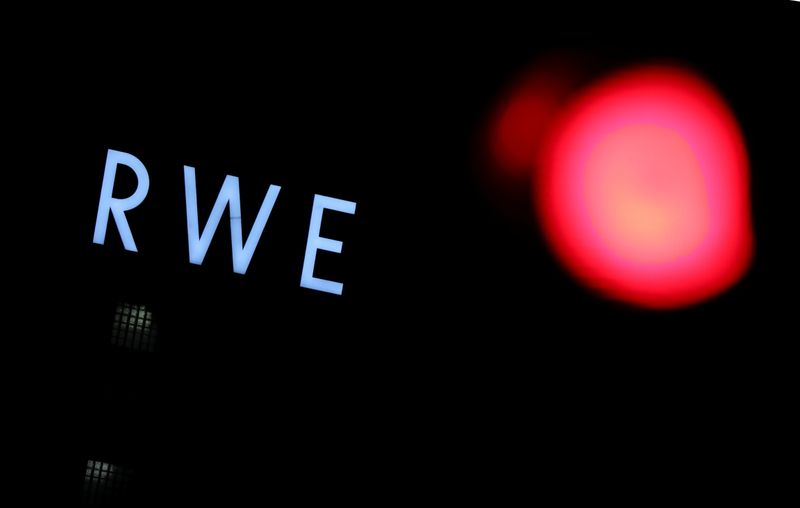 © Reuters. The logo of German utility and energy supplier RWE is pictured next to a traffic light outside RWE’s lignite power plant in Weisweiler near the western German city of Aachen, Germany, January 28, 2020. REUTERS/Wolfgang Rattay

FRANKFURT (Reuters) – Activist fund ENKRAFT has taken a stake in RWE and is calling for a separation of the company’s brown coal activities to remove the burden of a legacy business that has weighed on the value of shares in Germany’s largest power producer.

ENKRAFT, which has a track record in investing in the renewable energy sector, now holds more than 500,000 shares in RWE — worth 16.4 million euros ($19 million) at current prices — it said in a letter to management seen by Reuters.

This gives it the right to request items be put on the agenda of annual general meetings under German stock market regulation.

Activist investor Engine No. 1 has shown that small stakes can be effective when it won three board seats at oil major Exxon Mobil (NYSE:) earlier this year through what sources said was a mere $12.5 million investment.

RWE has undergone a major shift in recent years and is now one of Europe’s largest renewable players with an installed capacity of 9.4 gigawatts (GW), a result of the break-up of former division Innogy in a deal with E.ON.

The company plans to boost its renewables portfolio to more than 13 GW by the end of 2022 via net investments of 5 billion euros.

At the same time, it still operates legacy nuclear and coal assets, both marked for gradual shutdowns as part of Germany’s efforts to raise its share of renewables and cut carbon dioxide emissions to be in line with the Paris climate agreement.

RWE is “no longer investible” for many under stricter sustainability criteria, ENKRAFT said in the letter addressed to RWE Chief Executive Markus Krebber, who took the helm in May.

RWE’s EV/EBITDA multiple – a valuation metric that measures the ratio between enterprise value and core earnings – is 7.8, according to Refinitiv data, a steep discount to renewable energy pure plays including Denmark’s Orsted (OTC:) and Portugal’s EDPR, which trade at 17.8 and 14.7, respectively.

Separating RWE’s brown coal, or lignite, operations would be a way to close that gap and create value, ENKRAFT said in the letter.

“We are convinced that a focus on the promising renewable energy business and a fast and possibly gradual separation of the lignite activities brings with it an enormous potential to raise value,” ENKRAFT managing director Benedikt Kormaier said.

A spokesperson for RWE confirmed ENKRAFT’s approach: “As is the case with every investor we have offered them to have a conversation about our business strategy.”

At the end of 2020, RWE had 8.55 GW of lignite assets, accounting for more than a fifth of its total installed generation capacity and also making it one of Europe’s largest emitters of CO2.

RWE’s continued exposure to coal has caused concern among some investors, with Norway’s sovereign wealth fund selling its stake last year and top-10 investor Amundi criticising the speed of its planned phase-out of the fuel.

Shareholders Deka Investment and Union Investment have also called for an acceleration of the group’s brown coal exit, which under current agreements with the German government will happen by 2038 at the latest.

ENKRAFT also said an accelerated phase-out could possibly realise hidden reserves of up to 13 billion euros which it estimates are tied to RWE’s purchase of carbon emission permits.

Krebber last month said there were no plans to change RWE’s structure — which spans offshore, onshore, solar as well as coal and nuclear — adding that all technologies were needed to address the energy transition.