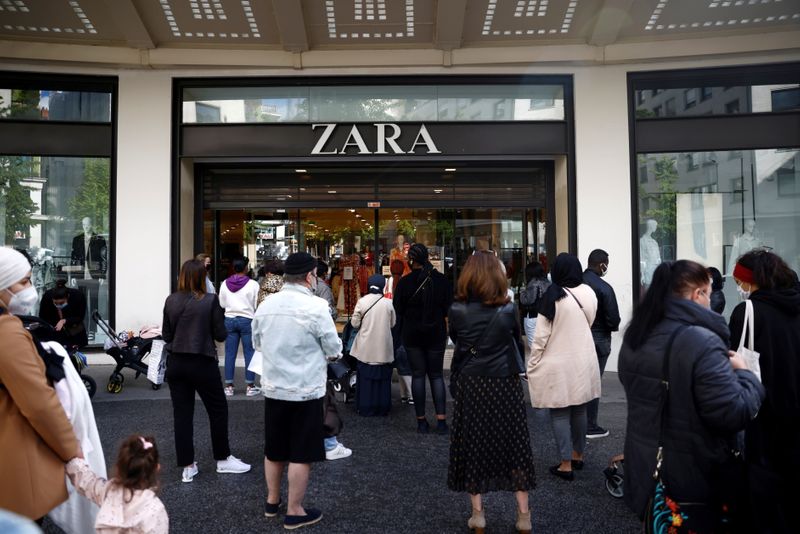 © Reuters. FILE PHOTO: Customers stand in front of a Zara shop in Nantes as non-essential business re-open after closing down for months, amid the coronavirus disease (COVID-19) outbreak in France, May 19, 2021. REUTERS/Stephane Mahe/File Photo


BRUSSELS (Reuters) – The euro zone economy grew by more than initially forecast in the second quarter of the year, revised data from the EU’s statistics office showed, with consumer rebounding sharply after two quarters of decline during pandemic lockdowns.

Eurostat said on Tuesday that gross domestic product in the 19 countries sharing the euro increased by 2.2% quarter-on-quarter for a 14.3% year-on-year rise. These compared with earlier estimates of respectively 2.0% and 13.6%.

The economies of every euro zone country expanded except Malta, although for Luxembourg there was no data.

However, GDP volumes in the single currency bloc were still 2.5% below their pre-COVID peaks. The United States is already 0.8% higher than its end 2019 level.

A draw-down of inventories pulled 0.2 percentage points off the overall figure, while the net impact of trade was zero.

Eurostat said also employment rose 0.7% quarter-on-quarter in the second quarter and by 1.8% year-on-year. The former figure was above the previously reported 0.5% increase, the latter was the same as that released in August.